Movement of an object based on thrust and gravity force in 2d scrolling game, need help

I want to make a box "fly" so while user press D it's add thrust then on A it decrese untill 0, W and S control the direction of my box.

I have problems after I add the gravity to update correctly my X and Y position. My actual code is like this: (I'm using gamemaker but it's same as other languages, came execute 60 frames per second)

I think I am doing it wrong because if I use g=0 and just using thrust my box act not as intended (ex: If I try to do a loop and stop accelerating my box will not follow the loop direction but continue on straight line)

Sorry for the stupid question but I really not know how to fix it. I see lot of tutorials with vectors but it's not supported here so can't use them. Thank you and best regards.

Your code seems to be using the formulas correctly, but let us check again what we want to do :

We want to update the position of our object. To do this we use the speed.

And we want to update the speed of our object, using acceleration

Now how to calculate the acceleration a? 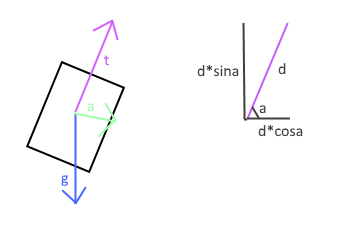 The acceleration is just the composition of the gravity and the thrust as you can see on my beautiful drawing above.

Now g.x = 0 and g.y = -9.81 (if going down means lowering y), so all we need is t.x and t.y, which can be easily calculated with basic trigonometry. Note that on my drawing I have put the angle compared to the floor, it is possible that you used the other one which means you need to reverse the sin and cos.

I'm not a good physicist, but I'll try to help a little bit.

There are some problems with understanding, what you're really want, but let's start with basic idea of movement and gravitation.

And, of course, we need the beatiful vector algebra for that.

What is a vector?

Vector is a kind of number, but with additional value - direction. Two vectors can be compared by value and direction.

As in natural numbers, there are some operations, which can be applied to vectors. We will see later. If you have a rigid body and you want to apply gravitation on it, than you should just create a vector with value 9.81 pointing down to the earth. I will try to explain the last sentence in details.

Also there is a little hack in vector algebra: we can represent a lot of vectors as one with calculated value and direction (this is called the sum).

Another important thing is that every vector can be splitted onto the X-part and the Y-part (corresponding axle projections). For velocity this will be your vertical and horizontal components of it. In other words: the values to apply at every frame to the body.

Not the answer you're looking for? Browse other questions tagged game-mechanics game-maker or ask your own question.

8
What do you use to support multiplayer turn-based network game for iOS and Android games?
25
“The Game Object” - and component-based design
1
Help developing a scoring system for a tech tree based game