Disclaimer: I know that client-side is always to be held with suspicion, but I'm trying to conceive of a way to verify the success or failure of javascript-based mini-games.

Here is an example scenario:

I implement a javascript-dependent picture-sliding game for various pictures.
You know the type: 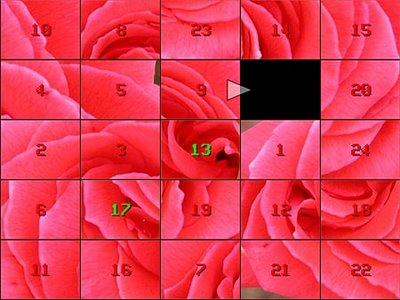 How to check success

I then want to set up a verification scheme to verify that the game has been completed, the browser would ping the website with a verification code or scheme to say "hey, I'm done, and the javascript mini-game is complete".

There are two ways that I can think of to make the verification work.

I don't have a huge, high bar for 100% secure communication in this case because I just want to add fun, and give some minor/non-overwhelming benefits from the mini-games, not build a fort-knox system. And if someone is smart enough to hack up a solution to the mini-games to automate them, I won't be excessively broken up about it.

So with that in mind, are these two approaches valid? Are there other approaches to try with this? Any examples in the wild that I could learn from?

(I thought of a better approach than what I wrote in the first place, but I'm leaving the original answer for reference)

This way you get the security of option 1 without the bother of writing code to playback a series of moves.

Personally I would go with option 2 because you don't need this to be 100% secure. That is definitely a lot easier.

Recording all the player moves and sending them to the server, is a good choice.

If you wanted more cheat protection, you could even have a key that is generated each move, using a seeded random number generator, using the the time in milliseconds for each key. Verify the moves and verify that the moves were created validly.

This will prevent people from packet sniffing and trying to spoof the moves with a solver program.

Not the answer you're looking for? Browse other questions tagged browser-based-games security .

8
Securing HTTP data from a JavaScript game to server
6
Securing JavaScript / PHP game data
4
How to verify if the client files are the same as the server files?
1
Implementing cheat safe loot algorithm at clientside
35
Anti-cheat Javascript for browser/HTML5 game
1
Protecting the integrity of a game state while minimizing amount of data sent
2
How to securely submit a score?
0
How can users verify a game distributed peer-to-peer has not been modified maliciously?