Why are multiple Nav Mesh Agents jittery when the target is inaccessible?

I have a simple scene. Most of the land is flat, except for three raised cylindrical platforms coming up from the ground. I have several enemies with Nav Mesh Agent components attached, with their target being the player. I used the Standard Assets' ThirdPersonCharacter script, and then called character.Move(agent.desiredVelocity, false, false); within the Update() of a character control script.

The agents work great when the player runs around on the ground. When the player hops on the platform (about 2 units above the ground), an agent will walk toward the edge of the platform and then stop, just as expected. However, if I throw in a second agent, both agents work fine only until the player stands on the platform. Then they start to jitter, like they cannot make up their minds on whether to turn left or right when they should really just walk straight. If I add even more agents, the jittering gets worse. With enough, they don't even move forward and simply turn left and right rapidly.

Clearly, there is a problem with interference, and I understand the agents are designed to avoid obstacles as well as each other, but here is what I found and tried so far:

Does anyone know what might be causing the jitters and how I could fix this?

As requested, here is how my Nav Mesh agent is configured: 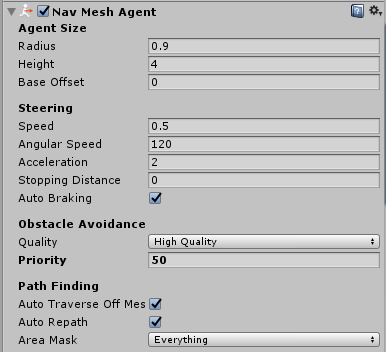 I had this problem and I was messing around with the Nav Mesh Agent and found out turning off "Auto Braking" fixed the problem. 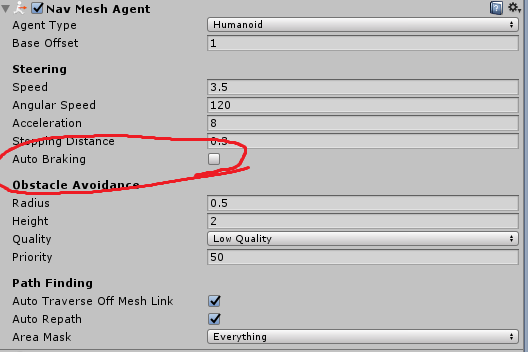 Try setting the priority of all the Agents very low, except one, and see if this exact Agent is also facing the same issue as the others. To me it sounds like the agents were constantly trying to find a new path, as the other agents get too close.

Not the answer you're looking for? Browse other questions tagged unity navmesh or ask your own question.

1
Unity - Across the wall
1
unity Tilt Android Device player Freeze When Die
1
How to increase vertical Nav Mesh detection for AI Actors? Using Default Query Extent?
2
Ignore UI elements when clicking to move
0
Nav Mesh Agent and obstacles
0
How can i make my soldier to patrol over the space stationin random?
0
Unity3d turn based navmesh algorithm
0
Player with navmeshagent keeps moving back to the last mouse position clicked
0
The 'speed' value of the Nav Mesh Agent component does not seem to affect speed at all (Unity3D/C#)
0
Nav Mesh Agents are not moving along the mesh