Consistent normals at any angle in bezier curve

Could not work out or find any solution for this.

I have a spline which consists of bezier curves (in 3d space) — in fact, any straight line will also have such problem.

I take a point on the curve and need to get a normal to this point at any given angle 0 - 360 (say, to build a mesh around it or to calculate an offset for the movement).

I understand that in 3d space we have to define a plane to build normal, normally — by using Vector3.Cross(A, B); In general, one uses curve's tangent as A and, e.x., Vector3.up or right as B.

But, if curve becomes vertical (it can go in any direction, imagine any track that is ground-independent, like in space), it gets aligned with Vector3.up, and the direction of normals goes crazy, swaps direction and so on, which is quite logical. More, it does so not only in straight vertical position, but start to change gradually around it.

So, the question is: how can I get consistent (all in equally correct direction) normals, using any given curve point position and angle for normal rotation?

Which generated the following normals (blue is up): 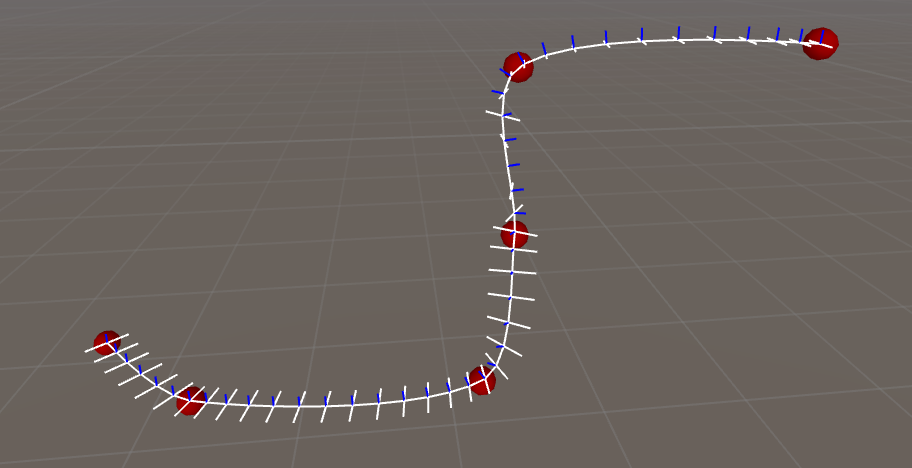 Now, if I try to use the previous normal for the direction:

first of all, I don't understand what to place here:

And any combination of tangent, normal and rotation gives me something like this: 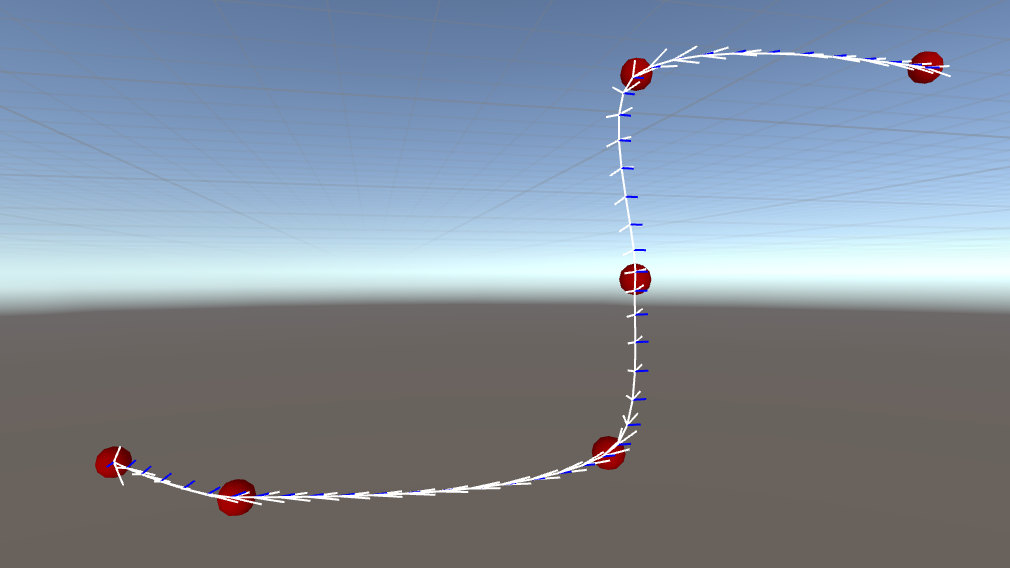 Where it can be clearly seen that normals on the vertical are improved (though not correct), but on the horizontal all went wrong, as if I just changed Vector.up to Vector3.right.

In addition, the code for generating the tube in its main part looks like this:

Where 0.01f and 0.99f are because ends of spline do not have control points and LookRotation produces an error about zero rotation. b and _bP are node indexes, and _P suffix is for "previous".

This particular code is used to generate a round rail and move an object beneath it. Thus, it is important that the bottom normal is consistent and always at the bottom (when it is vertical, this bottom is not the world bottom of course, but it protrudes at the side of the tube, object will turn itself accordingly, looking forward the curve).

I'm not sure why you say the suggestion in the comments "gets worse" - I implemented it and it performs as expected:

In each of these examples we have the same cubic spline being wrapped in a tube mesh, using a calculated normal to the spline at each point to decide the orientation of each tube cross-section.

I've marked the 0, 90, 180, and 270-degree points on the tube with coloured stripes to help show the differences in the twist.

On the left we have our original problem: when we try to select a normal in a consistent/memoryless way (eg. by choosing the vector in the normal plane closest to the "up" direction of our parent, substituting a default when the plane is horizontal) then we get sharp discontinuities: the tube can pinch at vertical segments, or show unnatural-looking twisting in near-vertical segments.

In the middle we apply a simple trick: instead of trying to align with some universal up, we align with whatever normal the previous step on our spline used. This keeps twisting distortion to a minimum, and our uv-mapped texture flows smoothly around each bend. But, the normal is free to wander all around the tube, which might be undesirable if your scenario has some structure to it that shouldn't linger at diagonal angles (eg. that green stripe, lazily hanging close-but-not-exactly-on the top of the tube).

On the right we apply a fixup: we slightly exaggerate the y component of the last step's normal, before using it to construct the normal for this step. This has the effect that, away from vertical sections, the tube will try to gradually untwist itself to point its normal as close as it can to vertical. This version picks the closest vertical direction, so it will seek down if that lets it introduce less twist.

So you can see, where the ends of the spline meet, the grid lines up, but the coloured markers are 180 degrees out (we now have blue on top and yellow on the bottom). I used distinct colours in this example to show it explicitly, but if you simply tile your texture twice around the circumference then this kind of mismatch becomes invisible.

Not the answer you're looking for? Browse other questions tagged unity c# vector normals beziers .

4
Controlling roll rotation when travelling along bezier curves
0
finding the angle of rotation of a 3d line
1
Generating a mesh from a set of generatively produced co-ordinates
0
Can you decompose a rotation into a rotation around an axis and a quaternion?