How to create a walkable crate box?

I have a 2D platformer with each platform having a PlatformEffector2D component. I want to create a crate that can be pushed.

I can remove the component and add a Physics2D Material with zero friction to prevent the player from getting stuck in the crate's edge, but I can't walk above the crate (because the zero friction). The images below illustrate it.

Player getting stuck in the edge of the crate that don't have PlatformEffector2D.

If it has a PlatformEffector2D it will fall below the platform.

My objects have the following components (when the player gets stuck at the edge of a crate):

What should I do so my player can push the crate and walk above the crate? Would anyone happen to have a sample script?

FYI: I use Physics2D.OverlapCircle to detect the ground. (Unity 5.4.0)

Finally I fixed it. I added two empty GameObjects to check the right and left side of the player. Now he can push the crate and walk above it without being stuck at the edge of the crate. 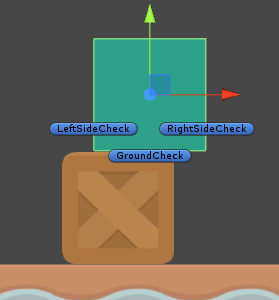 Not the answer you're looking for? Browse other questions tagged unity 2d platformer or ask your own question.

0
Unity2D Collision Issue
0
Unity 2D Prevent knockback effect from 2D Translation
0
How would I properly flip a character when they reach the edge of a ground object in Unity 2D?
5
Player gets stuck on edges between TilemapCollider2D tiles
0
Unity BoxCollider2D causes motion to be exponentially multiplied
1
How to flatten the collider for a tilemap?
0
Sticking the Rigidbody2D player to a moving platform without parenting & transform fiddling