How to calculate turn heading to a missile?

I have a missile that is shot from a ship at an angle, the missile then turns towards the target in an arc with a given turn radius. How do I determine the point on the arc when I need to start turning so the missile is heading straight for the target?

What I need to do before I launch the missiles is calculate and draw the flight paths. So in the attached example the launch vehicle has a heading of 90 deg and the targets are behind it. Both missiles are launched at a relative heading of -45deg or + 45 deg to the launch vehicle's heading. The missiles initially turn towards the target with a known turn radius. I have to calculate the point at which the turn takes the missile to heading at which it will turn to directly attack the target. Obviously if the target is at or near 45 degrees then there is no initial turn the missile just goes straight for the target.

After the missile is launched the map will also show the missile tracking on this line as indication of its flight path.

What I am doing is working on a simulator which mimics operational software. So I need to draw the calculated flight path before I allow the missile to be launched. 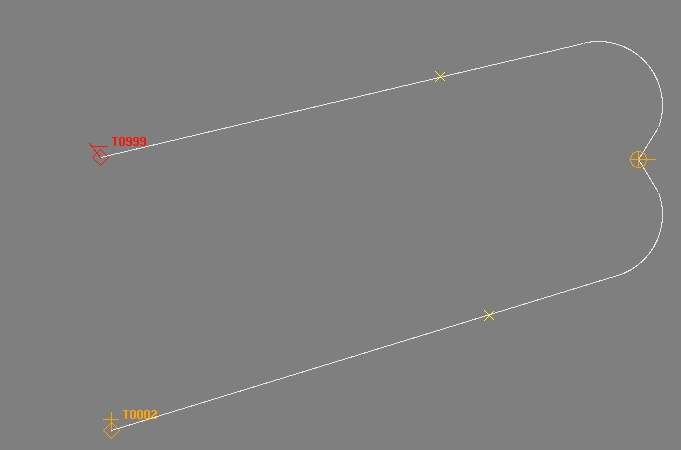 In this example the targets are behind the launch vehicle but the precalculated paths are drawn.

My math might be a bit wrong, so I have wikied the answer.

I assume you want to do the continually homing scenario - where the missile P1 travelling at a velocity V1 constantly tries to turn toward the player P2; but at a limited turning rate.

EDIT: This has no 'starting point' as it is a more robust (and is an easier implementation) for the continually homing scenario. You don't need to find a starting point for a circle - just limit the rate at which the missile can change direction and the rest happens because of the ghost in the machine.

I assume you want to change the direction by changing the launching heading to the target heading then continue straight to the target (a more fun problem should be to hit the target when turning!).

I have to assume that you are able to turn with the same turn radius in all direction (this is a simplification that is hard to see in real missiles).

The simplest solution is to use the 90° bending: the missile files until its trajectory forms a right angle with the target. if you turn exactly at the 90° point you will miss the target exactly by the turn radius, because you have to take into account the turning itself. The solution is to start to turn exactly "turn radius" meters(?) before reaching the 90° point, then turn forming a (try to guess) 90° arc to go straight to your target.

This solution is not always feasible, for example when you don't have the visibility on the 90° path (buildings or other obstacles).

The good news is that the solution works for every angle (not just the mythical 90°) the trick is to take in account the space needed to turn starting turning before.

How much before? This is why the 90° stuff is the simplest solution...

Let's say that you reach the visibility or the best target heading when the firing path forms an angle of θ° then you should anticipating the turn by:

...where secant is the reciprocal of the cosine. The proof is trivial and is left to the reader.

Seriously, the formula comes from a simple geometrical construction. 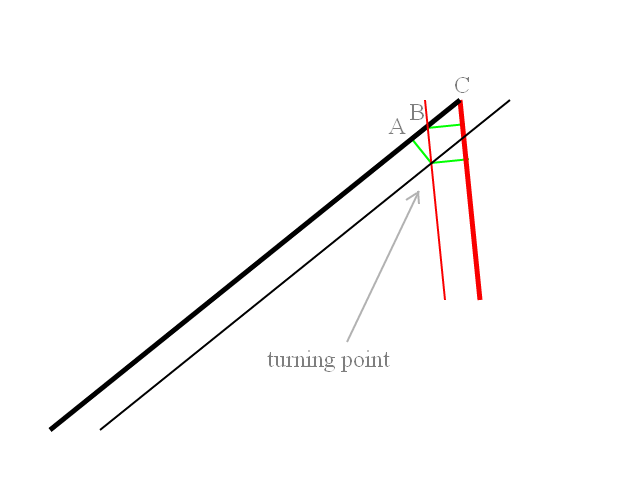 The green segments are turning_radius in length so you should see that:

BC is the secant.

Both of the green lines that come from the turning point are turning_radius in length and are perpendicular to the two paths; meaning that the turning radius is correct and the arc is tangent to both of the paths (as it should be if you make a turn under physical constraints).

Let me know if you see some error.

The drawing you are posted shows that there are multiple choices for path even with fixed shooter and target as you can see here: 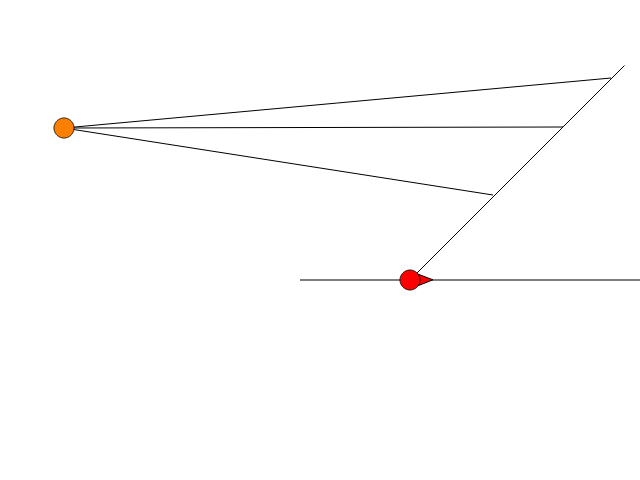 Once the target is choosed you can apply what i said above with the proper angles.

I'd implement a "steering behaviour" for the missle. The missile has: A velocity(a number), a position(a vector) and a (current)rotation. At each update in your game / at each frame, the missle's rotation is changed just a bit (towards the target). Then the missile is moved forward according to its current rotation and current velocity.

Works for 2D and 3D obviously, since the only difference is an additional dimension.

Another possibility would be to calculate the path of the missile before fiering it. Look up bezier curves or spline.

I feel like you're solving the wrong problem here. A real-world missile isn't going to worry about where to turn, it's simply going to turn until it's pointed at it's target. The only where-to calculation involved is when to start bringing the controls back to neutral as a real-world missile can't instantly change it's turn rate. That calculation will take only the missile's indicated airspeed as an input value and I would think would be precalculated.

I think the simplest algorithm would just follow two rules:

To calculate the point where the turn ends in 2D: