I am making my first game in python and I am really stuck at with a physics problem. The game I am trying to make is a copy of the game Breakout. In Breakout, the player controls a "paddle" at the bottom of the screen, which the ball will bounce off of.

I have got the collision to work, but I want the angle between the ball's direction vector and the "paddle" to have an impact on the angle at which the ball leaves the paddle. How can I make this work? I have tried a lot of things, but I can't get it to work.

In these situations I want the angle to be sharper when the ball hit's closer to the edge of the paddle. How can I calculate and make these angles to work? 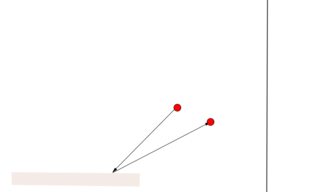 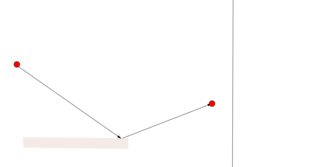 If you think in terms of the horizontal and vertical velocities of the ball then this may make the problem more tractable.

So I assume that when a collision is detected that this is handled by adjusting the vertical velocity. The most trivial way to do this would be to invert it so that the ball will start travelling up instead of down. You could for example do this by multiplying the y-velocity by -1. So this gives you the basic bounce, but you want it to bounce differently based on where it hits the paddle so you want to change the x and you velocity by different amounts depending on where the paddle collides with the ball. In the case you describe for example - assuming that you don't want to alter the speed that the ball is travelling you will need to create a function that uses pythagorus's formula to proportionately split the x and y velocities to a new ratio as a function of where it colliding with the bat.

Perhaps a few more examples to demonstrate the desired behaviour across the bat and we could explore some functions? where d * n is the dot product, and n must be normalized.

Not the answer you're looking for? Browse other questions tagged collision-detection physics game-mechanics python .

34
In Pong, how do you calculate the ball's direction when it bounces off the paddle?
4
Pong Collision Help in C# w/ XNA
7
A more sophisticated ball-paddle collision algorithm for Breakout?
3
Problems with moving 2D circle/box collision detection
1
Implementing powerups for my Breakout clone
3
What is the MTV (Minimum Translation Vector) in SAT (Seperation of axis)?
0
Pong paddle algoritm - How to know the direction of the ball when the paddle is at bottom