Should I care about CPU affinity of threads?

However, something which I have not considered is CPU-core affinity for threads. Should I care about it? What benefits does pinning threads provide, and to which CPU core do I pin which thread?

architecture multithreading cpu
share|improve this question
edited May 8 '17 at 0:36

I wouldn't bother unless you have a very specific issue which you know is solved by this. (And if you have to ask, you probably don't.)

Modern OSs are quite good at distributing threads around CPU cores to balance the workload well and avoid overworking individual cores, plus your code is not going to be the only running code that needs to use CPU cores. Threads in your drivers, in any libraries you use, and in other programs or background processes will also need CPU time, and you certainly don't have knowledge of exactly what is going on there. You don't want to be at the risk of starving your GPU's driver of the CPU time it needs just because you were greedy with your own code, do you?

For example, and just to illustrate, here's a Task Manager shot of a single-threaded game running on Windows 10: 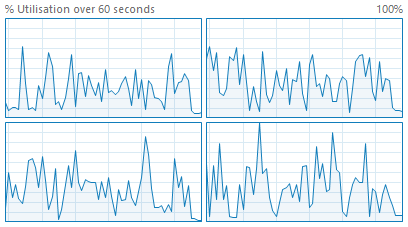 Bearing in mind the usual caveats about Task Manager as a profiling tool, we can nonetheless make a few observations.

I wouldn't bother unless you have a very specific issue which you know is solved by this.

For the curious though, I'd like to posit a couple examples of the types of "very specific issue" which might make this worthwhile. The ones I know of mainly come up when developing for consoles - where the hardware is fixed and you can optimize to its particular behaviour, rather than needing to scale to arbitrary core configurations & execution environments.

Not the answer you're looking for? Browse other questions tagged architecture multithreading cpu or ask your own question.

12
Scene Graph in Separate Thread
18
How can I make message passing between threads in a multithreaded engine less cumbersome?
4
Is using a dedicated thread just for sending gpu commands a good idea?
1
Multiple pipelined game loops
2
Decoupling rendering pipeline (for UI responsiveness): Multithreading and multiple contexts?
11
Update and render in separate threads
7
Multithreaded Game Loop
23
Is it normal for a game to use 100% CPU?