How to throw b2body with various speed at fixed position? 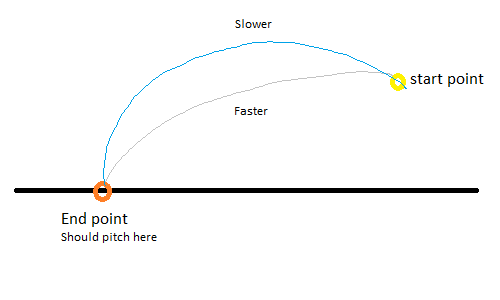 Above image is for ref to better representation.

I have box2d object and i know start point & end point position.

Now i want to give any force or impulse such that b2body will first collide at end point BUT with different speed also should collide at that same end point.

How should i achieve this?

Let's say you have a gravity force g (m/s²). The horizontal speed doesn't change, so you first need to calculate the amount of time it reaches the target horizontally:

The object need tk reach the target in the same time vertically too. We will have a speed of vY (m/s) at start and vY - g * t (m/s) at the end vertically (positive speed goes upwards). The average vertical speed is

This average speed needs to be so big, that the object would reach the target position in time t if there's no gravity

So, together, to get the vertical speed vY, you need to do:

Not the answer you're looking for? Browse other questions tagged physics box2d physics-engine or ask your own question.

2
box2d and constant movement
0
box2d resize bodies arround point
3
Friction due to gravity in an impulse based physics engine
3
How to implement throw curve with virtual height in a 2D side-view game
1
Moving CCNode with constant speed in cocos2d
1
Physics - How to calculate the next position of a ball rolling against a slope?
1
How to “amplify” a force and physic using AddForceAtPosition?
0
How to reapply force applied to one object to another object
1
Apply impulse in direction line is pointing with force proportional to the length of line