Communication between the SubSystems and the GameObject components?

Currently I have an architecture (not 100% accurate): 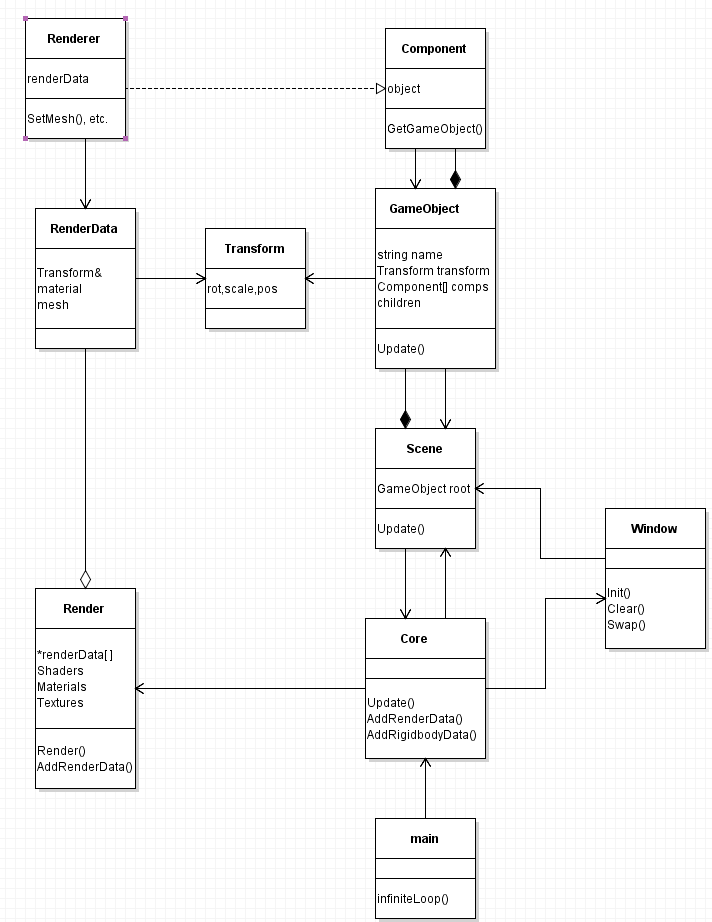 The RenderData contains primitives, which will be processed by the GraphicsEngine.

The problem with this is that the Scene has access to the Core. How can I register these RenderData's at the GraphicsEngine correctly?

And this is the same with Behaviour components signaling the AudioEngine to play a sound.

And this is also the same with the Rigidbody component's RigidbodyData and the PhysicsEngine.

Another problem: The Window handles the input, and have to signal these Behaviour components in the Scene.

Your RenderSystem could hold a reference to the GraphicsEngine. The active components could then be registered with the render system which would then simply use the primitives upon rendering.

To init a render system your core could initialise one when you open a window:

Note that nothing should stop the Render Component from accessing the dependencies like TransformComponent to properly do its job.

The fact that your GameObject actively passes render data looks like you have created an overcomplicated architecture.

Try to avoid having specialized functions (based on component specialization) in your GameObject. The game Object should be able to only manage Component objects without ever knowing what they contain.

If you have more than one render system you will have to add a way to filter the components that get registered in the different systems.

Concerning the input, same thing. The InputSystem is created by your Core when the window registers itself:

I don't know what you mean by behavior but if you mean they are custom scripts then these scripts can retrieve the InputComponent your game object holds and they can then read the inputs.

This way when a scene starts it will pass all its GameObject to Core. Core will simply register each component of each game object with the corresponding System.

Upon scene deletion the scene will pass all GameObject to Core and all Core has to do is to unregister all the Component objects from the systems.

Not the answer you're looking for? Browse other questions tagged c++ architecture entity-system component-based or ask your own question.

0
How to manage game components and their attributes?
11
How to properly handle collision in a component-based game?
15
Game Components, Game Managers and Object Properties
59
Using component based entity system practically
1
GameObject and Components
3
How do I handle cyclic dependencies, in an entity/components system?
2
What are the advantages of having component logic in a “system” versus the component itself?
2
Executing Components in an Entity Component System
1
Relation between game systems and components in a component-based architecture?
0
Unused methods after component inheritance in component based architecture?