How to import camera from Blender into Unity3D

I have a few cameras in Blender to export to Unity3D. They're exported as empty GameObjects, and that's what is expected. The idea is to have the main camera be a child of one of the camera empty GameObjects.

I tried rotating the camera game objects by Y+180 so that the camera faces +Z, parent the camera GameObject, then zero out its position and rotation.

How can I have a 1:1 export from Blender to Unity3D for camera objects?

Edit: Here is a table:

If I input any of the Blender RotXYZ values into Blender's camera rotation, export the FBX, I get the corresponding value in the Unity global RotXYZ column. But Expected rotation is what it should be.

Edit: Here is a poorly drawn image of what I'm seeing when I export from Blender to Unity.

Edit: I'm seeing inside fbx_utils.py (FBX exporter) that the camera gets rotated to have +X be the camera's forward direction.

Blender is a right handed coordinate system but you can export .obj and .fbx with whatever "up" vector you want. Selecting Y+ as your Up vector when you export your .fbx files should result in the orientation you're looking for. 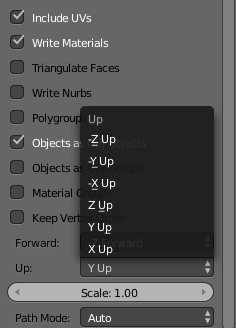 Okay! I figured it out.

Rotate the camera around the Z-axis by 180 degrees (matrix R). Since Blender's FBX exporter rotates the camera so that +X is the camera's forward direction, we need to apply the inverse of that rotation (matrix M) so that it's canceled out on export.

The only problem I'm having now is Blender not taking into account the changes made to matrix_local before exporting.

Export fbx from blender with scale 0.08. Make sure to export the camera only. Import your fbx asset in your Unity project. You have to add an animator to the camera. Editing the animator, you drag and drop your motion fbx. Press DEL to remove the first of the two animations. Magically your camera is responding your animation.

2
How can I export Blender game logic for controlling actor actions?
4
How to import character from Blender to Unity?
1
Can’t Load .fbx from blender to Monogame correctly
0
How can I implement a quaternion camera?
1
How to set default pose of model from Blender? (Exported as FBX)
0
Blender export does not render correctly in Monogame
0
Parts of the FBX getting flipped upon import from Blender to Unity