Why is my 2D mouse aim not working properly?

I'm trying to program 2D mouse aim, where the arms and the gun in the arms rotates to point at the mouse. But for some reason, the arms and gun rotate and do not follow the mouse position.

The each of the arms and the guns are separate node that are parented to an orbit node that is located on at the shoulder of the arms.

The following code is script that is attached and running on the orbit.

Here is a GIF of the result of this setup:

Here is an image showing where the positions of the upper arm and the gun. 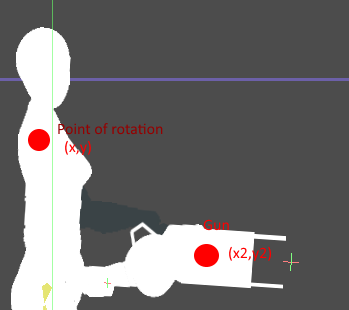 37
Mouse aim in an FPS
0
XNA - positioning after rotation
2
2D bone animation - point gun at mouse
0
How to make a bullet shoot in the direction of the gun in mobile?
2
How to accurately capture the direction in which the mouse moves?
0
Rotating player around planet causes drift in gun aiming at mouse
3
8-way aiming in run 'n' gun
0
Rigidbody not working properly
0
2D - How to make a gun muzzle aim at the mouse when the rotation pivot isn't on the muzzle?