How can I rotate pixel art sprites without the aesthetics getting ruined?

I'm right now in front of a huge "Game Design" question. I'm making a pixel-art-ish game and using bilinear interpolation could solve lots of animation-issues. On the other hand, its not a "pixel-game" anymore.

If I use Bilinear Interpolation the animation works but it looks "hybrid-ish" and the artstyle gets lost. Either I mess up my animations or I mess up the artstyle. I cant have both it seems.

Is there any other way to solve this? 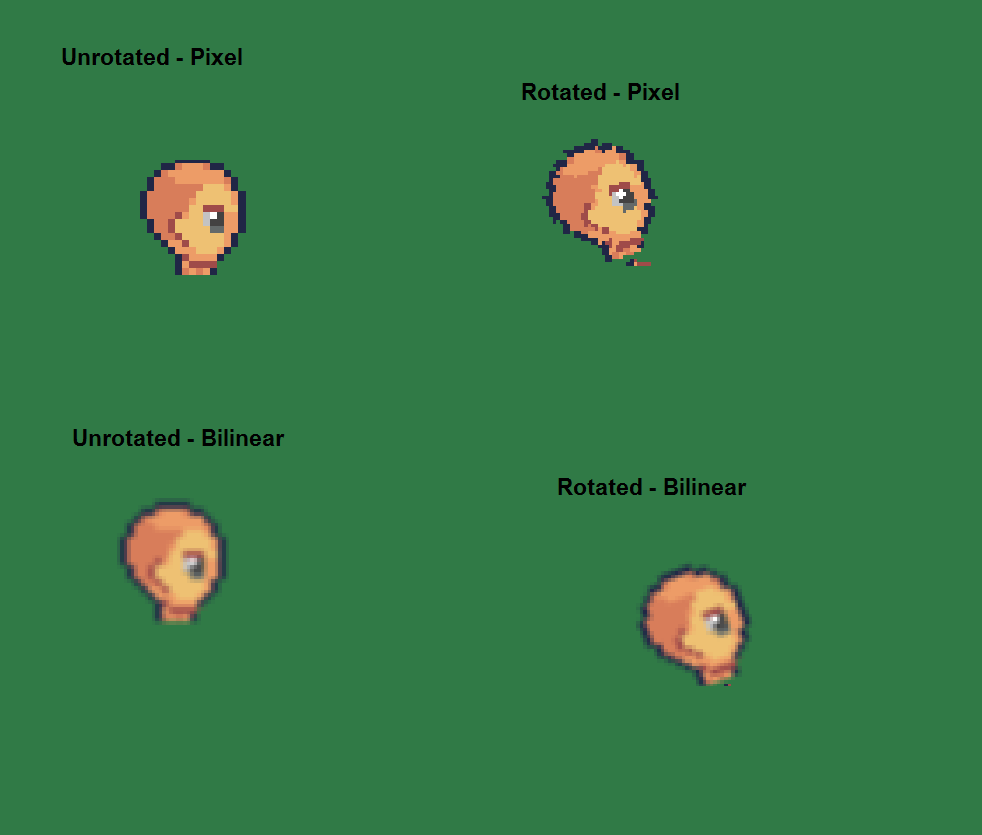 Automatic rotation of pixel art by other angles than 90° usually goes wrong. If you want to maintain the pixel-art aesthetics you usually won't get around redrawing your art in each angle.

If you use a faux-retro look where your sprites are actually in a far higher resolution than they look, you can sometimes get away with upscaling them by an integer factor without interpolation in your graphic editor and then rotating them in linear interpolation at runtime. To avoid your sprites from getting blurred while in original orientation, always ensure that the drawing position is rounded to the nearest integer (some graphic engines/frameworks/libraries allow you to draw sprites on floating-point coordinates which often results in blurring). But that's usually still just a lazy substitute which doesn't reach the quality you can reach with manual work.

Here is an example of a sprite in the original size, upscaled by factor 3 without interpolation and then rotated by 30° with linear interpolation:

Have a look at RotSprite.

RotSprite is a scaling and rotation algorithm for sprites developed by Xenowhirl. It produces far fewer artifacts than nearest-neighbor rotation algorithms, and like EPX, it does not introduce new colors into the image (unlike most interpolation systems).

The algorithm first scales the image to 8 times its original size with a modified Scale2× algorithm which treats similar (rather than identical) pixels as matches. It then calculates what rotation offset to use by favoring sampled points which are not boundary pixels. Next, the rotated image is created with a nearest-neighbor scaling and rotation algorithm that simultaneously shrinks the big image back to its original size and rotates the image. Finally, overlooked single-pixel details are restored if the corresponding pixel in the source image is different and the destination pixel has three identical neighbors.

You can either implement this algorithm yourself as part of your game's drawing code, or use it to create rotated assets beforehand. The pixel art tool Aseprite has integrated RotSprite as part of it's sprite editor.

Also, have a look at this Unity forums thread on how to use RotSprite in Unity, as well as more general information about RotSprite.

top left of page is a option: auto-select: group & layer. choose layer option then rotate. thats the way no one tells you.

Not the answer you're looking for? Browse other questions tagged 2d rotation pixel-art or ask your own question.

14
Which is the best approach to make a 2D character to be able to use tons of different equipments when in action?
40
Learning To Create Better Art (2D Games)
16
Can Unity 2D be used to make pixel-art games?
15
Creating a seamlessly looping 2D multiplayer level?
6
Unity pixel art distorted sprites
0
“High” Quality Pixel Art Games (varying the scale factor)
0
Problem with FPS camera in Software Renderer
0
How do I remove the background from pixel art sprites in Gimp?
5
In pixel art, should i keep the same color palette for every sprites?