How do I represent blended tiles in a mesh/vertex array?

I recently started making a Terraria clone using the LÖVE library, which is based in OpenGL.

In Terraria, for each tile, there is a large texture with all possible combinations for merging with neighbouring tiles. They usually only support tiles of the same type, and sometimes other materials, like dirt. As a result, they only need a single vertex array. 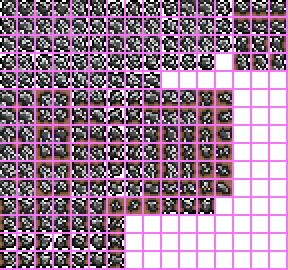 In Starbound, it seems to be simpler. A tutorial I found notes the use of basic 8x8 blocks, with a few edges drawn if the block is next to a block of a different type.

I want to implement a similar mechanic, but I encountered a serious issue. A single vertex array does not allow z-ordering, which I would need.

What is the best way to implement this?

I found a way myself.

The key is to have two vertex arrays. In first you store solid blocks. In second you store edges, only if they are visible. Then you simply draw solid blocks first, then edges.

It is easy to add third array to store in-corners.

Hope this helps somebody!

Not the answer you're looking for? Browse other questions tagged opengl performance tiles tilemap love2d or ask your own question.

46
How'd they do it: Millions of tiles in Terraria

2
Implmenting RLE into a tilemap or how to create a large 3D array?
0
How do I implement my old OpenGL-based gfx_render_triangle_list using DX11?
2
OpenGL tile rendering
5
How do I reuse the same vertex data, but with different colors, for my sphere objects?
2
How to render a single texture across multiple tiles? (Unity2D)
1
How to draw textured tile map in opengl
3
OpenGL large tile map rendering
1
Replacing client side vertex arrays with glBufferData
0
Migrating 2D game from immediate mode to VBOs
1
Rendering voxel data efficiently