How do I get diagonal 3d movement when two buttons are pressed?

I have a model moving using root motion. Currently, it's moving in 4 directions; Forward, Backward, Right, and Left.

Now, I want to make the character move in 45 degrees. I made a chart to understand the axes. (link because I can't have anymore attatchments)

The character has a running animation for every direction, including the diagonal directions. Here is my animator controller set up:

I started out with trying to move diagonally left, and tried out a few scripts.

Here, I tried using a Boolean to trigger the animation 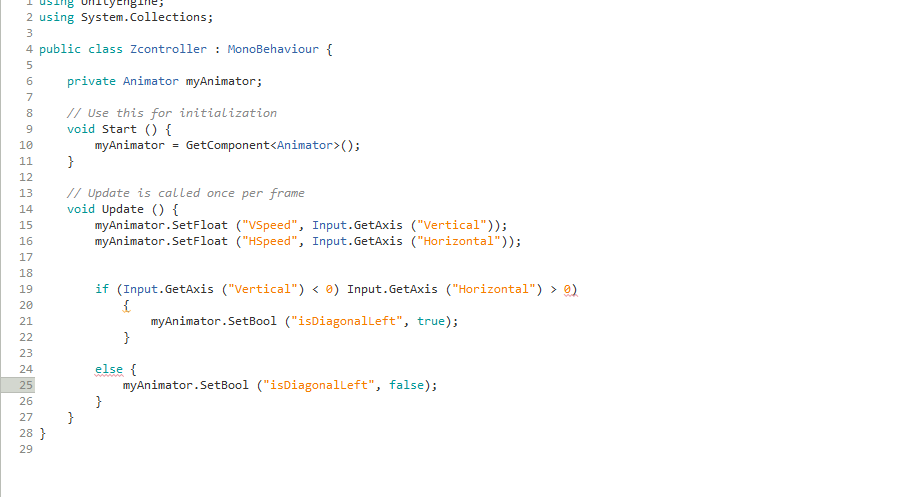 Script 1 did not work, and caused the character to move diagonally only when the Down Arrow key was pressed.

Script 2 also did not work, giving me the error: "Operator '||' cannot be applied to operands of type 'float' and 'float'."

Script 3 gave me some bracket errors.

What can I do to get the character to move diagonally properly?

Is there any way to combine two float values in code? If so, how?

EDIT: I tried a solution one guy on Unity Answers suggested, which was using a 2D Freeform Directional chart. Here's my setup for that (Link becaus I can't have any more attatchments):

(again, remove the spaces and parenthesis)

It still doesn't play the diagonal run animation whenever I hold two directional keys down.

(If anyone's wondering why I'm trying to achieve such an archaic way of movement, I'm trying to emulate the locomotion style of Megaman Legends 2, an Action RPG released in 2000 for the PS1.

Unlike modern Action RPGs where you can move 360 degrees, MML2 had 8 directions of movement. Kind of like Ocarina of Time.)

Especially for a game like MegaMan Legends, this is the system that I would use.

1) Construct a direction vector based on the user's input. Something like:

We leave the y component empty because y velocity is upward motion, which is typically added by pressing a button once (e.g. jump button), not holding a button.

Since a diagonal input would result in a vector of (+/-1, 0, +/-1) which has a magnitude of ~ 1.41, we normalize the vector to avoid diagonal movement being faster than cardinal movement.

This allows you to control how fast the character runs.

Here we add jump inputs. We use GetButtonDown and isGrounded to avoid double jumps, and you can tune the strength of the jump by changing jumpStrength. We don't normalize this vector because, true to MegaMan's design, you maintain your horizontal velocity when jumping.

6) Apply the movement to your character.

You can use a physics method here if you choose, but I find this much simpler. If you need to worry about collisions, you can use velocity to perform a RayCast to see if you will be overlapping an object after translating. If so, only translate as far as you can.

7) Send your velocity variables to mecanim.

8) Set up your blend tree in mecanim.

You can use a Blend tree to blend your 8 animations while using the velocity variables to control the blend direction/amount. I personally would have used just 4 animations for each cardinal direction and blended between them for the diagonal directions, but if your animations are all unique in some way then it would of course be necessary to have all 8 of them.

This is the system I have used in all of my projects thus far, and it has always served me well. I hope you find this helpful.

Not the answer you're looking for? Browse other questions tagged unity c# movement character boolean or ask your own question.

4
How can I map thumbsticks to cardinal directions?
5
smoothly recenter view over time
1
Pass Vector2 to Instantiated GameObject
0
Get enum value “string”, and get int value of that
3
How can I make players move diagonally at equal speeds?
0
How to make a door stay open if the player is inside the trigger zone?
0
How do you program diagonal movement?
1
How to completely stop the camera from clipping into the ground