How do I sort with both depth and y-axis in OpenGL?

Continuing my misadventures in pyOpenGL, I've refactored the whole thing to use 4 buffers:

My draw loop binds each buffer, and calls drawArrays() twice. I have enabled depth testing, and clear the depth buffer on each draw:

For the moment, I've hard-coded the z coordinate for each of the things I'm drawing, just to be sure they're definitely in the right order - grass tiles are at 0.9, the tree (4 tiles) is set to -1.0 and the sprites are at 0.0. This is what I get: 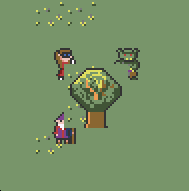 In a previous attempt to build this engine without openGL, I was using Tkinter canvas images, which ended up very slow. To get the draw order right, I had to sort all the objects by their y-coordinate plus their z-coordinate, because it is all on a 2D plane. I want something similar, here. I don't understand why the grass tiles cause this problem, when they should be drawn right at the back. GL_DEPTH_TEST is definitely enabled - if I disable it by commenting out the glEnable() call, the sprites are drawn on top of everything (including on top of the trees). I want an illusion of depth by being able to walk behind high-sticking-up objects.

I've continued hacking away at this, and I've gotten a little further by modifying my shader:

By checking for transparent pixels and throwing them away, I get a lot closer to my goal, however it is still not quite right, and I do not know how to fix it.

The wizard is at z:-0.5, and the tree trunk is at z:-0.2; it is doing what I'm telling it to do, just not what I want it to do. If I put them on the same z-level, the trunk is drawn over the wizard when he stands in front of the tree, and correctly when he stands behind it:

I don't just want depth sorting, I also want to sort on the y-axis. How can I do this in OpenGL?

opengl python
Share
Improve this question
edited May 10 '17 at 5:04 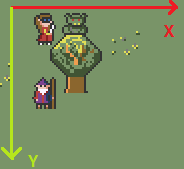 The RED DOT, is the sprite X, Y coordinate. So the Z value has to correspond to Y coordinate of the RED DOT. Also in this case the tree is a sprite and not part of the tilemap (directly).

Or you could have the red dot be right in the middle (but that doesn't really matter for the correct Z ordering):

No manual sorting is necessary here, all the sorting is done using depth testing!

Not the answer you're looking for? Browse other questions tagged opengl python .