How can someone make 3D tiles not looking like perfect cubes?

Here are the graphics an artist did for me: 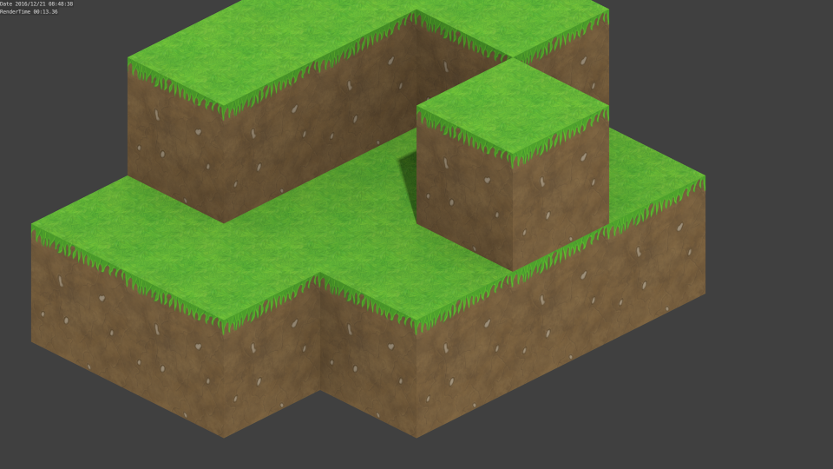 While the texture is nice when seen as image file, I think the tile is somewhat flat.

If he bevel the cube, then there will be tiling problems (not to mention seams between cubes). How can he make tile looks less flat?

If he make the 3D model to act like 2D isometric Tiles (which have very irregular outline) there will be so much polygons that will be a nightmare for him to model dozen of Tiles.

Of course keep in mind that for occluding reasons (each cube project 6 planes that are used to occlude hidden geometry) the overall shape should be actually bigger than a cube volume, but not smaller (anyway I can loose the height requirement, cubes can be made of any height).

Usually to render a large quantity of gird aligned cubes is to use a method known as "Marching cubes".

Note: the main alternative is to use ray casting and voxels (point cloud data), which is less common in video games, however it is the standard in medical imaging. See also: A Fast Voxel Traversal Algorithm for Ray Tracing.

You will see "Marching cubes" come up often when people talk about improving the performance of "voxels". The idea is that you will be iterating over the array of cubes and merging them into a single mesh in such way that hidden faces are removed, and also merges co-planar adjacent faces.

However, what I have described so far is simply Meshing.

Marching cubes (no quotes this time) goes a step further. In a similar way to how you can pick a tile from a tilemap based on its neighbors (Autotiling), Marching cubes will pick polygons depending on the neighbor cubes.

For each cube, you will pick a mesh from these configurations using a lookup table based on what vertices are hidden or visible. Since each cube has eight vertices, we have 256 entries on the table, which are reduced to the ones above by considering symmetries.

You do not have to use the same set of cases as described here. Hopefully you can see how you could edit this to match what you want.

Wait, that is what you are doing. Huh.

Seems I finally found a solution on my own. It is still not perfect, but looks much better! :) If you have further suggestions I'm open to everything. Basically on corners I need to "decorate" with additional geometry corners that are still part of a cube but with different normals.

I think it is actually more performant than correcting normal maps and to remove seams I just have to remove the "decoration" around the cube faces. Still I'm a bit in hunger with blender for having to resort to this trick instead of manually placing my normals (I could have used a shape different from a cube instead of trickin the smooth shading).

You don't need that extra geometry to apply a bevel effect via normal map. Just bake the normals of a high-res beveled cube to a simple cube in Blender (free software). There are many tutorials for this on Youtube.

I don't think it will look incredibly realistic but it will not look worse than what you have with more geometry, and require only 6 faces.

Not the answer you're looking for? Browse other questions tagged tiles art 3d-modeling .

6
Combinations for tiling two textures together
5
How can I smooth my voxels similar to 7 Days to Die?

4
I'm a single developer making a game made of blocks. Can I make 3d characters made of blocks without looking like Minecraft?
2
How can I achieve smooth animation of sprites between discrete tiles?
2
How to store "chunks" of tiles or How to make my implementation work
34
How can I design good continuous (seamless) tiles?
8
How can I author objects with perspective that fit into a tile-based map but span multiple tiles?
0
How can I optimize performance when updating tiles?
2
How do I make my foreground tiles stand out more from the background?
0
Is there a way to make lowpoly characters close to looking like anime?
4
How to make different Rule Tiles interact with each other?