How can I recreate the movement of arrow in air?

Where I have structure Particle: 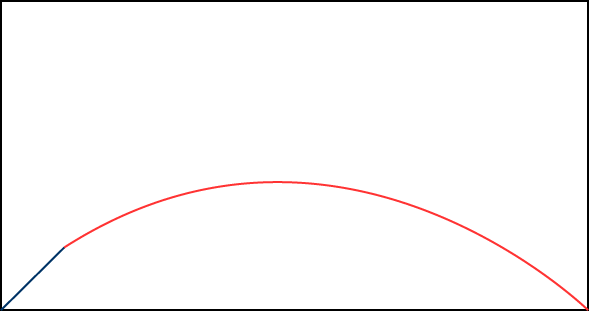 And I am tried to figure out how to make till I was stuck with this(I am trying to calibrate in a way the arrow to the initial DistArrow:

The problem is that it just rotates 180 degree, dunno why it does, if it will infinitely fall it should be A at the top of B, a line perpendicular with oX.

I am seeking a good solution not involving to much physics, any advice will be highly appreciated.

You need a bit of physics, and a touch of calculus.

You launch the arrow at an initial velocity of V, and a launch angle of A, and have gravity G as -9.81.

I is the intitial x and y locations of P at the moment the arrow was launched.

t represents the time in seconds since the arrow was launched.

Not the answer you're looking for? Browse other questions tagged physics projectile-physics trajectory or ask your own question.

6
How to bounce a 2d point particle off of a circular edge
8
How to make an arrow land at a specific position in 3D world space
3
Implementing character movement using real physics
7
How to apply friction vector to acceleration in top-down 2D game?
2
How am I supposed to timestep this gravitational simulator
1
How to calculate the ideal hit of arrow?
1
How to add rotation to two particle collisions?