So I'm basically doing a snake game in Console Application. I'm kind of new to programming and I'm not sure how to do the game loop. My code looks like this:

I want it to read user input while sleeping. Could you tell me how to do it? Thanks in advance

I think it goes without saying that this is not something that a console application is well suited for, but at the same time, I've also written a Tetris clone for same. So.... 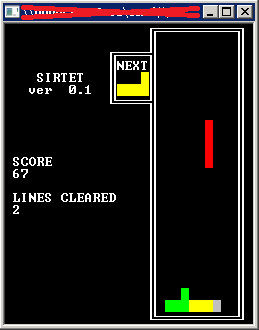 While it's not quite an answer to the question you've asked (you can't do anything while sleeping. It's the point of sleeping), you can handle input to a console while managing drawing at the same time.

This approach is neither foolproof nor well-advised, but it is functional. Instead of relying on fixed sleep calls to create your time delay, you create your own timer to handle the waits for you. You then capture input inside the main loop, but outside the timer logic so that input can be received as close to immediate as possible. Also note that using DateTime is not going to create the world's most accurate timer, but it works for this application.

Also note than when using console as a renderer, you need to be smart about how you "draw" to it. Only drawing when and where necessary.

Not the answer you're looking for? Browse other questions tagged c# game-loop or ask your own question.

5
Receiving user commands in a text based console game
5
Have a while loops but inputs depend on events fired, what are some ways on getting the input?
1
Rendering Loop Problem (Java)
6
Input/Output console window in XNA
12
EXTREMELY Confused Over “Constant Game Speed Maximum FPS” Game Loop
10
Java 2D game programming: Different approaches to make a game loop
0
C# XNA :Snake Game, direction problem
1
Why does my Java game loop randomly jump to 62 FPS and crash?