Help me think through a logical way to implement the desired effect.

So it seems I need to do just that, link the motion of the mouse and sprite, instead of the position. This also seems to have a "catch" though.

So because these two methods have these "catches" I have to choose between the sprite jumping across the screen or only being able to move the sprite halfway back when this event is triggered. I think this means I need to really rethink my whole methodology. Any thoughts on a slick way to achieve this effect? It seems impossible to me without having my PC physically move the location of the mouse cursor (which, if I could do that, would totally work!). 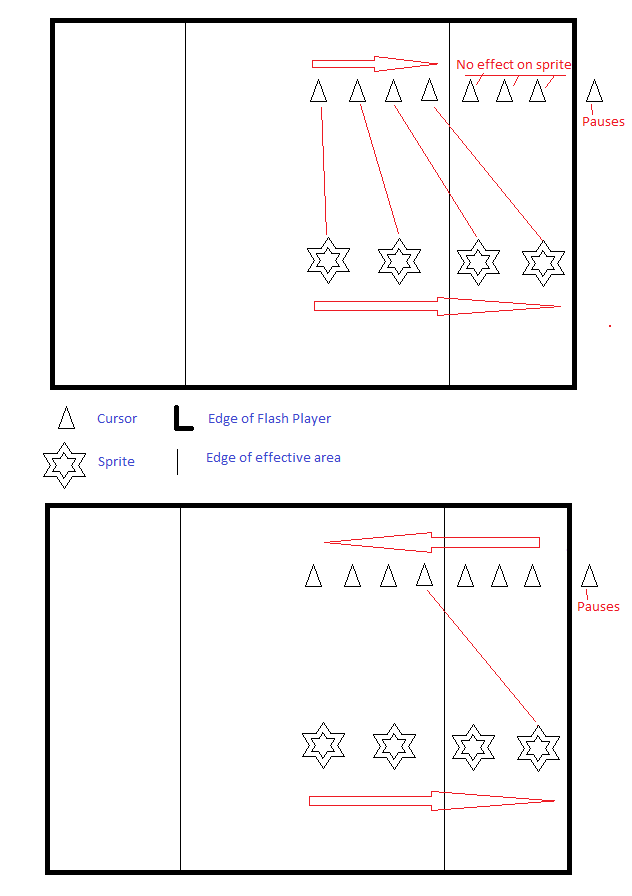 in the bottom picture, the event has been triggered, but the sprite can't respond to the movement of the cursor, becasue it is already to the far right. I could manually move the cursor to the far left, at which point things would work fine, but the goal is for this to be instantaneous reversal of the relationship.

If I were to port this to iOS, I think I could use the accelerometer to control the Sprite which effect could be instantaneously reversed without a cursor running out of real-estate. Right? What about using a finger drag to control the Sprite? Would I run into the same problems as the mouse on a desktop? Just musing here.

I have an idea (just to give you an idea of the kind of ideas i am open to for suggestions). My idea is give a visual cue as to where the Sprite would "jump" to when the correlation gets reversed. I am imagining a ghost image, or an outline, or a Sprite with raster lines through it to indicate that it is an inactive version. Then when the correlation switches, the feint one becomes solid and vice versa.

It might be easier to take a delta, so record the position of the mouse in the last frame/update, then multiply the distances (change between last position and current position) by the desired amount (2 and -2 if mouse is clicked in your case).

Not the answer you're looking for? Browse other questions tagged movement actionscript-3 mouse .

2
Rotating sprite to face cursor
2
GLFW mouselook under OSX
0
Getting mouse movement value with DirectX Tool Kit
3
Calculate Relative Mouse Movements Regardless of position
0
Unlock cursor through script
0
How to make an object towards the mouse on one Axis - Gamemaker Studio 2
0
OpenGL convert mouse position to world coordinates without gluUnproject in Python?
0
Move camera when dragging right and left