How do i eject bullet shells from a gun? Java/slick2d

So, here is my problem: I am working on a top down 2d shooter in Java and have a character, which can move and rotate/fire to the mouse direction. Shooting guns etc. works fine but now i am trying to implement a shell ejection system, which "ejects" the shells next to the player. The problem is, that i can't just draw the shells next to the player since the player has an x and y position which are rotating. I want the shells to have a random radius in which they will be ejected. But i don't know how to implement something like this. Any suggestions?

To give you a pseudo code solution: 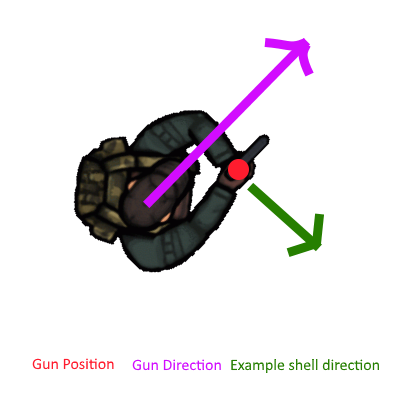 I made a quick image of what I mean to better illustrate these steps above. That should be the rough steps of what you need to do. Keep in mind that you will want to use an object pool to stop yourself wasting resources and if it's available to you stop updating the shell object once it reaches it's final point so that you only render it (not wasting precious CPU cycles).

From what I understand the problem that you have is that you don't know how to find the XY position of the gun since the gun is at an offset from the middle of the character. I'm guessing that the gun is always in the same position when being fired relative to the center XY (or at least you know about every position or can figure that out another way).

What you can try doing is figuring out what the distance is from the center to the gun, then use Sin and Cos (yay maths) to figure out where the gun is in space based on the rotation. There is a great site that visualises the relationship between sin and cos here.

So to give an example: 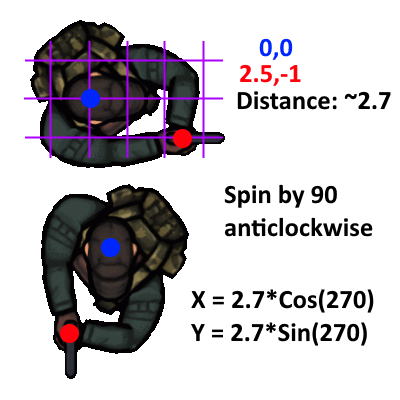 Use pythagoras theorem to work out the distance, again check that website i mentioned above to get a better writeup.

Not the answer you're looking for? Browse other questions tagged java lwjgl slick .