How to optimize collision detection in a lane-defense game? 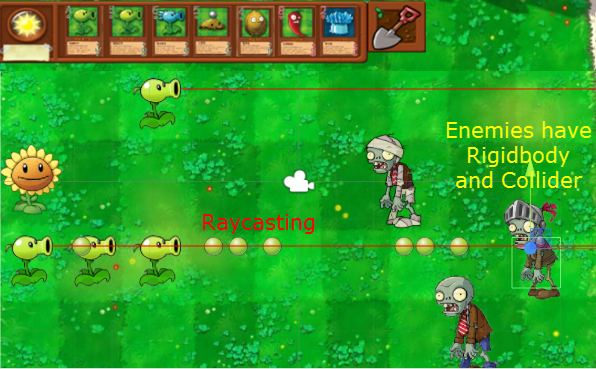 Raycasting is a very useful and powerful tool available on the physics engine. It allows us to fire a ray on a certain direction with a certain length and it will let us know if it hit something. This however, is an expensive operation; its performance is highly influenced by the ray’s length and type of colliders on the scene.

in this game enemies randomly create in some points.is it that better instead of checking by Raycasting call the fire(); method(foreach plant in them row) when created zombies? 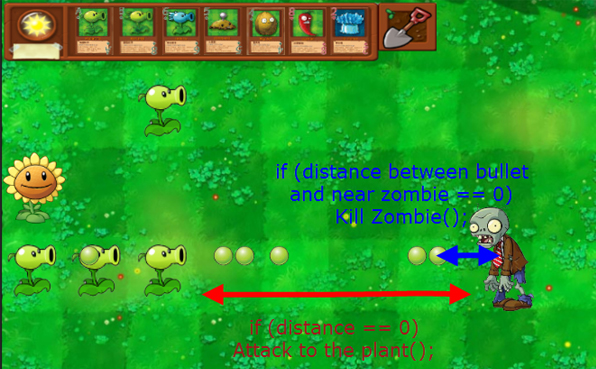 First of all, "performance loss" is only an argument in situations where performance actually matters. When your framerate is good enough and your code is easier to read and maintain with colliders and raycasting, then by all means, stop fixing what isn't broken.

But in the case of a lane defense game like plants vs. zombies, you have very simplified game physics where the Unity collision detection engine indeed seems overkill.

First you need to know which lane each object is in. There are several ways you could do that.

Each of these approaches has advantages and disadvantages. Pick the one which seems to fit best into your overall architecture.

A side-note about the Rigidbody component: You only need rigidbodies when you want to have kinetic physics (gravity, mass, friction, objects bouncing off each other, etc.). When your game isn't supposed to have anything like that, you shouldn't put a rigidbody on anything. I am not saying that adding realistic physics couldn't be an interesting spin on the overused tower defense formula, but when you want to create an authentic Plants vs. Zombies clone, you likely don't want that. When all you want is collision detection, then all you need is a Collider.

It all depends on your game. Typically you would use distance methods combined with other methods like GJK and SAT to calculate the collision detection mathematically. Using raycasting (in combination with the methods above) is good for things that move very fast. If you have two objects moving towards each other at a high enough speed such that they pass each other during the one frame, then you would need to raycast to make sure that you dont travel through the object.

(because you are just adding velocities to their positions, you are not moving them one pixel/unit at a time)

However, if you are making a game like Plants V Zombies as you pictured, you could get away with far less.
You know that objects are only on one axis and things fit into cells. You can simply check whether or not x values overlap/pass each other.
Or, more simply, check what cell an object is in and see if something else was there already

Not the answer you're looking for? Browse other questions tagged unity collision-detection tower-defense or ask your own question.