How can I spawn particles around a point but inside a box?

How could I spawn them so they don't spawn outside the box, and so that they are at an exact distance away from the spawn point and particles can slightly overlap.

Here is an example of what I'm trying to do: 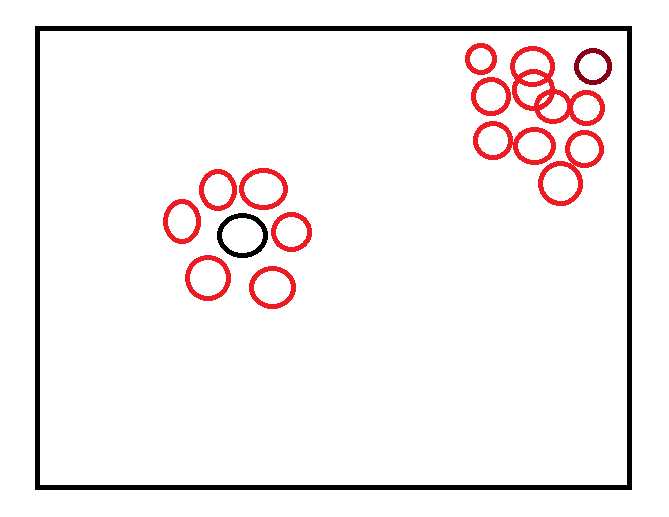 To make sure the newest spawn point doesn't clip the boundary, test that its center is at least as far away from the boundary edges as the size of its radius:

To prevent the newest spawn point from overlapping other spawn points by too much, you'll need to check that it isn't too close to any other point generated thus far:

Note: the code above could be sped up a bit by checking squared distances instead of actual distances. Also, my solution has a bias for picking locations closer to the center of the spawn area. Uniform disk picking requires a couple more square root calculations:

Alternatively, you could also create a random 2D vector & normalize/scale it as needed (as suggested in comments by @Bálint).

For the convenience of answering, I put the test results in variables; you'll probably want to just use the tests directly in line or possibly as method calls depending on your situation. Since testing for edge clipping is cheaper, I would do that before checking for edge overlaps. If you need to generate many points, looping to check for overlap might prove to be a bit of a bottleneck - if that's the case, you might want to use a Poisson distribution placement scheme instead.

Not the answer you're looking for? Browse other questions tagged java libgdx particles spawning or ask your own question.

34
How can I make a good-looking explosion particle effect?
4
DirectX11, how to properly update a staging buffer with a structured buffer's count using CopyStructureCount
6
How to bounce a 2d point particle off of a circular edge
2
How to offset particles from point of origin
11
How to do the Geometry Wars gravity well effect
4
Fast method of detecting whether point is inside mesh
0
Generating and rendering not point-like particles on GPU
1
Libgdx particle editor absorb effect
0
Finding distances between sprites in an array