Unet how to control child gameobject?

I'm currently getting into the Unity networking system called unet. I have a child of the local player authority, the weapon. The weapon (PlasmaCannon_left and right) have a script handling firing, because weapons can be replaced, and have different firing intervals, this seemed to me to be the easier way. However, they won't fire. 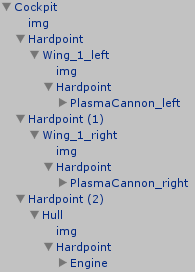 I am getting the "Weapon Spawned." log message, but nothing inside isLocalPlayer conditions is happening even though I have added a networkidentity component and set Local Player Authority to true.

Like I said, I'm still learning so I have no clue what's going wrong here.

for some reason isLocalPlayer is not inherited from its parent, the gameobject also did not have client authority, i solved it by calling a function in the PlayerController to actually fire the bullet, only using variables used in the weapon/bullet objects.

This wont work if it is a child of the gameobject with local authority (the network manager recognizes the parent gameobject as the local player).

Not the answer you're looking for? Browse other questions tagged unity debugging unet or ask your own question.

2
Unet, client is unable to control spawned units
1
Unity multiplayer (online) - How to connect to a 'Client-Host' without using Unity Paid Service
1
Client not executing commands in Unet
0
Unity UNET, problems spawning and then destroying that instantiated prefab
1
How to completely stop the camera from clipping into the ground
0
Can Inspector interactions be used with UNET