I am working on a game project where most of the action takes place in a large scene that is built to look like a space station. Because it is all technological and enclosed, I can't use a directional light to light the whole scene, and I need to be able to change the color of the lights for an alarm system. I can't bake the lights, because then I can't change their color, and I can't leave them all as dynamic lights, because I have about fifty spot-lights, and they take up a huge amount of memory, so much so that the lights can't even render on mobile devices.

Is there any way to do this without baking?

I am getting about 3000 batches in the Unity Editor Stats on average, in some places it is higher. Even viewing the game in full screen in the editor makes the game run super slow because of the amount of rendering it has to do, and I have a pretty new computer.

Here's a picture of my scene (As you can see, it is fairly large as you are able to see the UI box clearly from the scene editor): 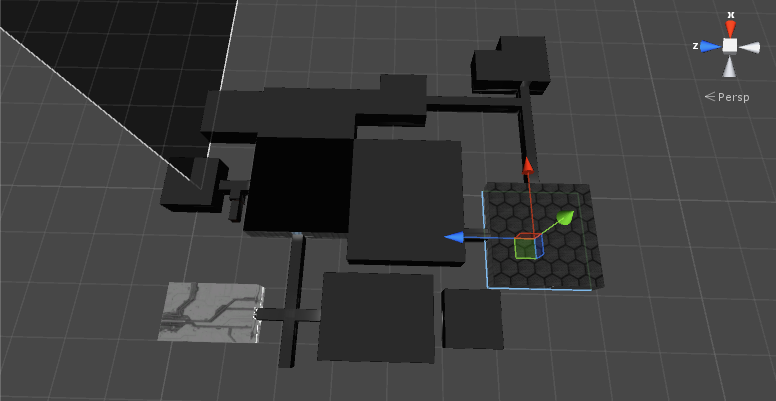 And here's the Stats box: 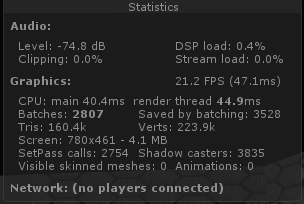 Here is an example of my scene in play mode: 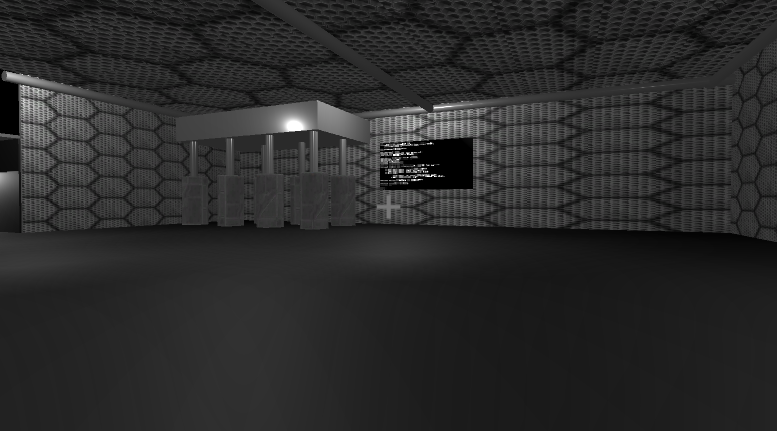 UPDATE: I removed the shadow casting, which isn't necessary for my project, and it improved the framerate slightly, and the batches number is smaller, averaging out at about 1500 now, but the performance still is not optimal.

I ended up using occlusion culling like a few people suggested in the comments. It worked wonders for my situation.

Setting it up is very simple as well.

First, you have to mark everything you want to occlude other objects as occluder static, and everything that can be occluded as occludee static: 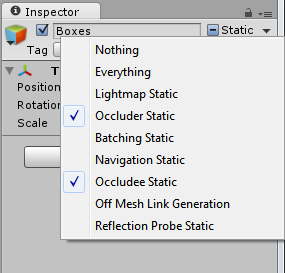 In my situation, my whole station doesn't move, so everything but the lights was marked as static already.

If needed, you can alter the values, but the default values worked perfectly for me, then click bake! 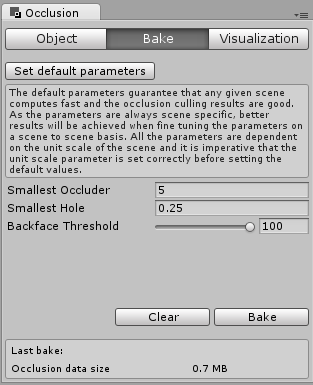 Wait a few seconds, and that's it. You're done! You can view the occlusion culling real-time from the visualization tab while you play the game, and it's as simple as that. (Though there are options to occlude moving objects if that is necessary. You'll have to look at the full manual for that though. I didn't need to do any of that.)

Performance is great now. I have reduced it in most areas from 3000 batches to anywhere from 5 to 500, based on where you are facing in the game. Thanks for the helpful comments!

I know you don't want to use baked light, but you may be interested in LightProbes technique from unity. Here you can find more information about it https://docs.unity3d.com/ScriptReference/LightProbes.html

I think you can achieve nice looking effect with combination of different types of light.

Not sure what's available with unity, but I think you could achieve the same effect with an emission map (think a texture that supplies additional values used to decide the rgb for the texture -> and then in your shader you parameterize and intensity variable and you can get it to go on/off on parts of the object).

From there, if you have some bloom effect (which I guess would be global to the scene), I think it'd probably be decent looking. Maybe put a dynamic light behind some important lights if you need it

Not the answer you're looking for? Browse other questions tagged unity lighting or ask your own question.