I'm in the case I need to transform a Quaternion coordinate system to a concrete one, let me explain.

For example, if the user has the headset correctly worn when the pose is reset (take current pose conjugate as the zero pose) then if you look up the mouse moves up, if you move right it moves right, and even if you roll your head the tracking is correct, but if the user has the headset wrongly placed (inclined to some side) when the zero pose is reset then the movement is incorrect as the axes don't match.

I hope this image explains it better than me. 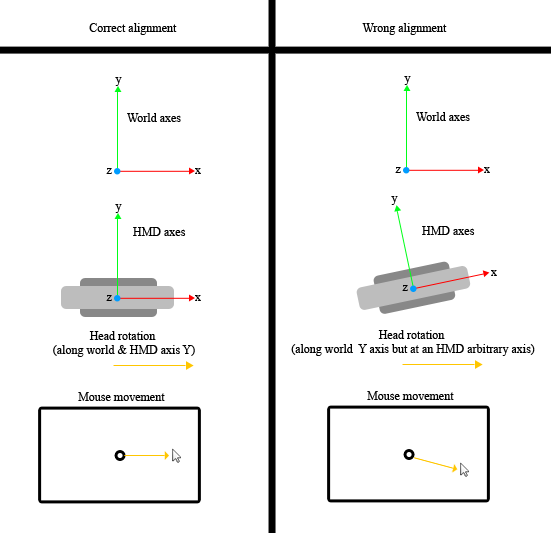 This is the code for calculating the mouse position (it includes a low-filter as smoothing):

And this is the code to calculate the zero pose:

So the question, how can I transform the arbitary HMD axes to world axes in order to get the mouse movement right?

Browse other questions tagged quaternion virtual-reality orientation axis or ask your own question.

7
Calculating a quaternion so a bone points in a specified direction
8
Routes on a sphere surface - Find geodesic?
5
Inertia Tensor and World Coordinate conversion
3
How can I reorient the axes of an object?
1
Standard key bindings for movement along three axes?
0
Wierd behaviour upon limiting rotation on Y-axis
26
Using Quaternions: What can I do with them? (without the maths)
0
How to rotate velocity Vector3 to always point the same direction so that it can be applied to 2d blendtree?
0
Get world object transform relative to another object (potential parent)