Using Quaternions: What can I do with them? (without the maths)

I am a Game Developer and did not study Mathematics. So I only want to use Quaternions as a tool. And to be able to work with 3D rotation, it's necessary to use Quaternions (Or Matrixes, but let's stay at Quaternions here in this Question). I think it's important for many developers to use them. That's why I want to share my knowledge and hopefully fill the holes I have. Now....

So as far as I understood:

A Quaternion can describe 2 things:

You can do with a Quaternion:

Is everything I explained until now correct?

Is that "all" you can do with Quaternions? (obv. not)

What else can you do with them?

What are the Dot product and the Cross product between 2 Quaternions good for?

Updated Question with some answers

At least in terms of Unity's implementation of Quaternions, the multiplication order described in the question is not correct. This is important because 3D rotation is not commutative.

So, if I want to rotate an object by rotationChange starting from its currentOrientation I'd write it like this:

(ie. Transformations stack up to the left - same as Unity's matrix convention. The rightmost rotation is applied first / at the "most local" end)

And if I wanted to transform a direction or offset vector by a rotation, I'd write it like this:

(Unity will generate a compile error if you do the opposite)

For most cases you can get away with Lerping rotations. That's because the angle used "under the hood" in a quaternion is half the angle of rotation, making it substantially closer to the linear approximation of Lerp than something like a Matrix (which in general will not Lerp well!). Check out around 40 minutes into this video for more explanation.

The one case when you really need Slerp is when you need consistent speed over time, like interpolating between keyframes on an animation timeline. For cases where you just care that an output is intermediate between two inputs (like blending layers of an animation) then usually Lerp serves quite well.

The dot product of two unit quaternions gives the cosine of the angle between them, so you can use the dot product as a measure of similarity if you need to compare rotations. This is a little obscure though, so for more legible code I'd often use Quaternion.Angle(a, b) instead, which more clearly expresses that we're comparing angles, in familiar units (degrees).

These types of convenience methods that Unity provides for Quaternions are super useful. In almost every project I use a this one at least a few times:

This builds a quaternion that:

The reason the "up" only gets "as close as possible" is that the system is overdetermined. Facing z+ to forward uses up two degrees of freedom (ie. yaw and pitch) so we have only one degree of freedom remaining (roll).

I find quite often I want something with the opposite exactness properties: I want local y+ to point exactly along up, and local z+ to get as close as possible to forward with the remaining freedom.

This comes up for example when trying to form a camera-relative coordinate frame for movement input: I want my local up direction to stay perpendicular to the floor or inclined surface normal, so my input doesn't try to tunnel the character into the terrain or levitate them off of it.

You might also get this if you want the turret housing of a tank to face a target, without peeling up off of the tank's body when aiming up/down.

We can build our own convenience function to do this, using LookRotation for the heavy lifting:

Another handy convenience method is Quaternion.RotateTowards, which I often use like so:

This lets us close in on targetRotation at a consistent, controllable speed regardless of framerate - important for rotations that affect the outcome/fairness of gameplay mechanics (like turning a character's movement, or having a turret track-in on the player). Naively Lerping/Slerping in this situation can easily lead to cases where the movement gets snappier at high framerates, impacting game balance. (That's not to say these methods are wrong - there's ways to use them correctly without changing fairness, it just requires care. RotateTowards gives a convenient shortcut that takes care of this for us)

In Unity, one of the most common users of the dot product is whenever you check if two quaternions are equal via == or !=. Unity computes the dot product to check similarity rather than directly comparing the internal x,y,z,w values. It's worth keeping this one in mind as it makes the call more expensive than you might expect it to be.

We also use it in an interesting use case too..

Firstly, we have a whole series of rotations to consider:

Combine them all together and you end up with a lot of complexity (and a lot of huge numbers!). When the viewer is standing on the surface of the planet, we don't want them to be hurtling at some crazy speed through our gameworld space. We'd actually rather they were stationary and somewhere near the origin - move the universe around the player instead. 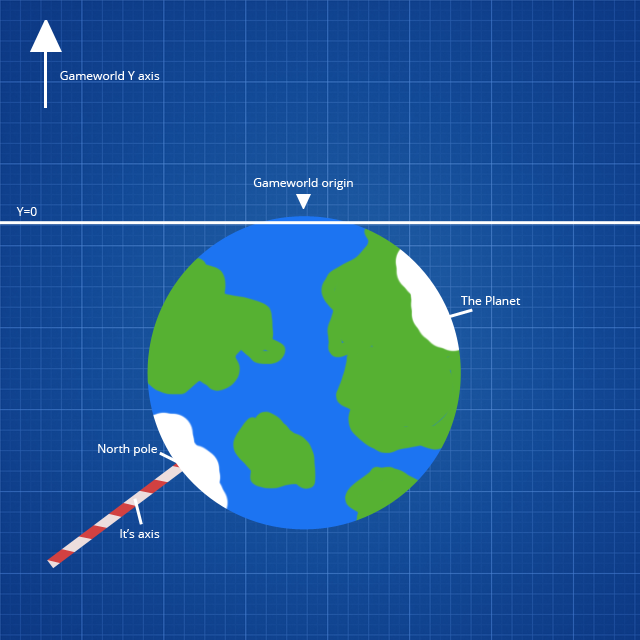 Importantly, in order for us to be able to get the planet's spin and tilt correct in this scenario, we need to axis lock the pole so it can only swing up/down on the image above (i.e. swinging "up" as the player travels north). That's where a quaternion dot product comes in. If we didn't use a dot product here and instead just multiplied the tilt too, this would happen:

Notice how the poles of our orbiting 'planets' are always tilting towards the star. This isn't what happens in reality - the tilt is in a fixed direction.

Without going too far off topic, here's a quick summary:

By obtaining only the angle, we drop some of that unwanted rotation. At the same time we also ended up with a longitude measurement which is useful for navigation as well as the local climate.

* Planets are constructed from lots of grid cells. Only the nearby ones actually get displayed.

Not the answer you're looking for? Browse other questions tagged unity rotation transformation quaternion .

58
I'm rotating an object on two axes, so why does it keep twisting around the third axis?
0
Rotating only 2 axes of rotation quaternion to "point" in a direction
0
Is Quaternion math really practical knowledge for a graphics programmer?
0
How to rotate CharacterController on slope
0
Unity smooth local rotation around one Axis, oriented toward a target
1
Why does my 2D top-down joystick code occasionally stop working?
0
Character rotation jitters when looking around
0
How to set transform.up without locking the y-axis?
0
How to rotate the transform only on the Y?
0
Rotating with a preferred direction
See more linked questions

9
Can I use quaternions to control an helicopter?
7
How do I correctly use dual quaternions for rotation and translation of an object?
3
Quaternion rotation
1
XNA Help - Slerping the KoolAid
1
Custom lookAt function goes wild
1
How can I min-max quaternions?
0
Rotation of a cylinder between to spheres in R3
0
Restore object right vector to horizontal position using quaternions
0
Unity smooth local rotation around one Axis, oriented toward a target