I know about several of path-finding algorithms that exist: depth-first search, Dijkstra's algorithm, A* etc.

Now I would like an algorithm that gives me the N paths with lowest cost. Can this be obtained by some simple modification of one of the above? Or is a different algorithm needed, and if so which?

Yes, you can modify these algorithms to find different shortest paths, with a few caveats.

First, there can be an exponential number of shortest paths. Consider a simple chessboard example, where you're trying to travel from the top-left corner to the bottom-right corner. Since a chessboard has 8x8 squares, you just need to travel to the right 7 times, and down 7 times, in any order. One way to find different paths is to use tie breakers that tend to produce different results. For example, you can try a tie breaker that always moves horizontally before vertically to produce one path, then one that does the opposite.

Here's one example algorithm you can try: modifying A* so that it penalises nodes that have been used previously: http://jsfiddle.net/3huzrpyk/ 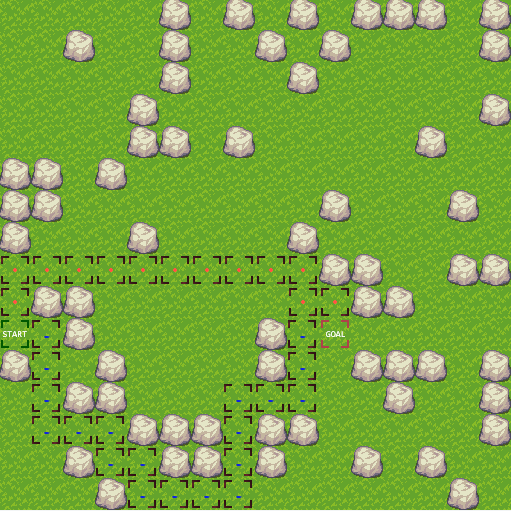 This algorithm, based on this, simply looks for two paths. The second path (blue) uses a custom cost function (the g(x) part) that penalises nodes that are already used by the first path. The penalty can be customised - low values means it tries to maintain very short paths, high values (like the image) means it tries to avoid repeating nodes even if it must take a longer detour.

5
Which algorithm used in Advance Wars type turn based games
7
Techniques for (literally) cutting corners on square grid maps
16
Making the AI take different paths to each other
4
Which pathfinding algorithm should I use for multiple enemies and tower placement?
24
Path finding algorithms?
6
Do I need path finding to make AI avoid obstacles?
5
Find Minion with shortest path
2
Tile Based A* Pathfinding, but with a bomb
2
How can I favour vertical travel before horizontal with my A* path-finding heuristic?