I have an issue that I can't solve. There are many questions relating to similar issues and they come down to "change some settings" and "object is travelling too fast". My problem doesn't seem to equate to either of these.

I am running through the basic tutorial for the Breakout Game and have added some of my own tweaks to the code, my issue is that even at low speed my ball overlaps with the bricks, rather than bouncing off them.

I have read various related questions but nothing seems to fix this for me.

Below are some screenshots of my issue and my code. 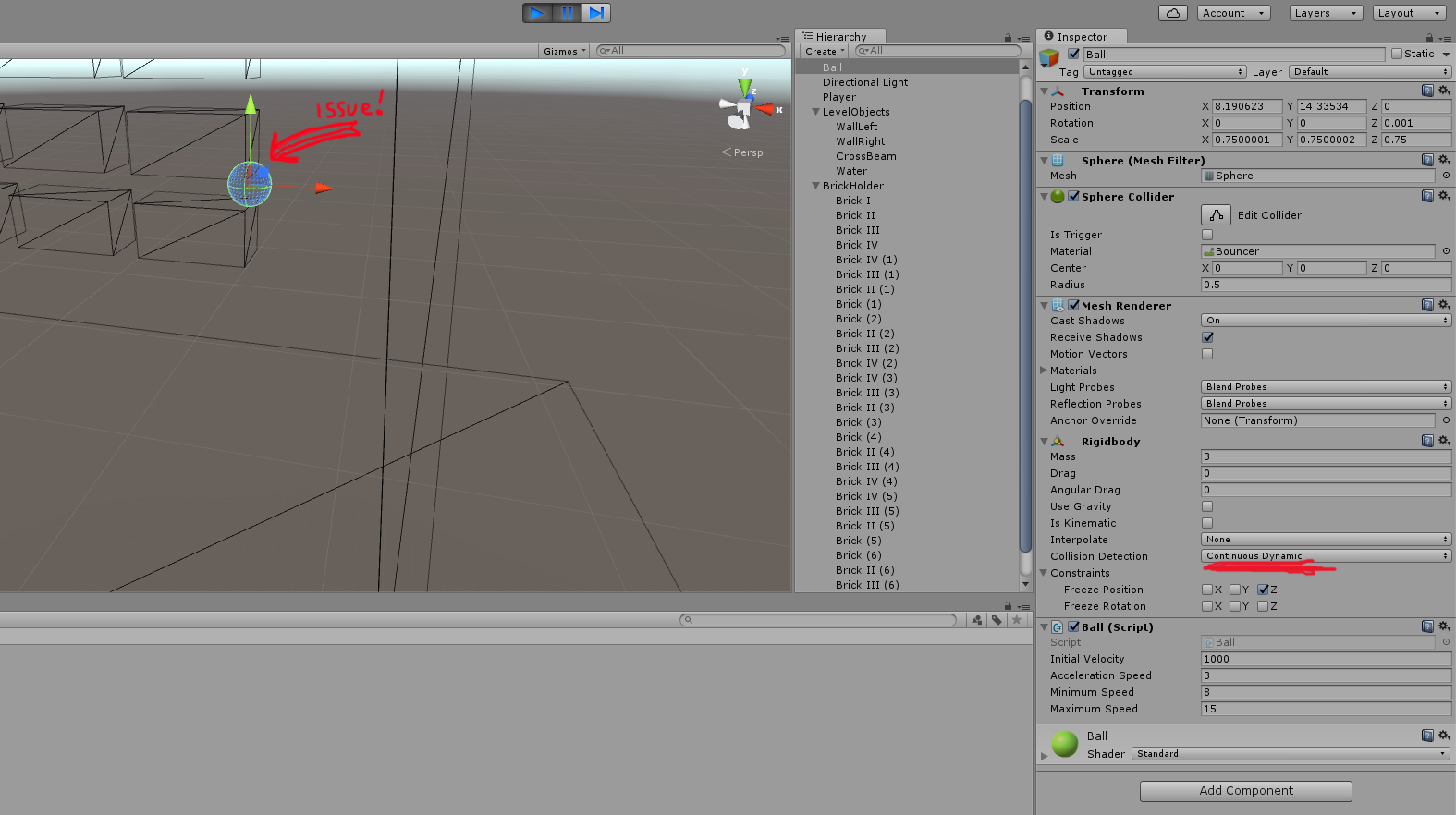 The only aspect that I can't fully account for is that I've added an acceleration function so when ball is launched it accelerates over a course of several seconds to it's max speed. It's start speed is 8 (although the force applied is actually 1000 when launched, ignore that figure), and the max speed is set to 25 15. I don't know enough to say if this is somehow "breaking" rigidbody overlap detection but it seems pretty silly if so. See line 63 below:

Why are the rigidbodies not detecting and preventing overlap?

First - you don't need SpeedUp(); - your rigidbody on the ball has no angular drag and no drag, they are 0. Also you could change Friction to 0 in physics material. Your ball won't lose speed.

Second - check if your bricks have box collider on them and it's not trigger. Also you can remove rigidbody from your bricks if they don't move using Physics. It will give you better performance. Only 1 body that is colliding can have rigidbody to detect collisions - no need for other bodies to have rigidbody.

I would have left this answer in comments if I had more than 50 points - I'm just not allowed to do so now.

2
How to move rigidbodies
5
Unity3D -- WAV plays an octave too low on Android
1
Bounce with multiple collisions
2
Unity3d physics stability with low fixed timestep
3
How to completely stop the camera from clipping into the ground
0
Improving Rigidbody collision between real-time movable object and other Rigidbodies
0
Taking moving colliders into account
2
Interpolation on Rigidbody2D not working
1
How do I get OnTriggerStay2D to consistently work in Unity?