How to display Render Target live to HUD widget in UE4

I'm making a security camera system in Unreal Engine 4. It allows the player to 'activate' the monitor, which should display the Render Target texture or the material made from it on the HUD. However, that just doesn't work. There's just no image when I try to play it. Nothing appears on the screen. I'm using blueprints btw, not C++. And yes, I did check and make sure that it's not the part that displays the HUD that's going wrong, it's the displaying of the render target to the UI widget. To display it, i've tried using the image component in the UI widget.

Ok... I never quite figured this out(if anyone knows, still answer) but what I did instead was I created a cube that I had display the material for the render target right in front of the player camera, and had it hide/show whenever the HUD did. It looks the same as it would if it was in the HUD, but it's just a weird way to do things.

This may be updated in the newer version, I applied the Material created with Render Target to the Image in the Brush settings of my Widget BP which Material Domain needs to be "User Interface". Then the Render Target material should be shown properly in the widget even in the viewport. 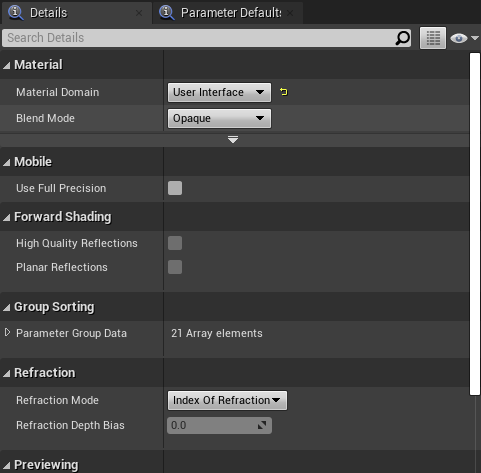 Not the answer you're looking for? Browse other questions tagged gui unreal-4 unreal rendertargets blueprints .

1
Is setting the render target back to backbuffer supposed to take long?
35
What is the difference between a HUD and a GUI in a game?
1
Why Are Some Foreign Characters Not Displaying Properly
1
How to stop and start sprite sheet flipbook materials in a widget blueprint?