Android: How to prevent player(drag/drop touch input) from moving through non-moving objects?

My player is moved around the screen by touch user input. The user touches the character and drags him to another position. (implemented in touchevent: actionmove and actiondown). I want the touch-movement to stop, as soon as the character reaches an object. So I don't want the character to pass through the object.

I used rect.intersect(player,object) to detect a collision between the player and the non-moving object. As soon as a collision is detected, I have to move the character back from the object, so that both don't overlap. I used this minkowski-algorithm (Which Side Was Hit?) to find out on which side the collision occured. According to which side it is, I set back the player's position so it doesn't overlap with the non-moving object. Example for one side:

Consider using a swept collision test instead of just an intersect/overlap test. 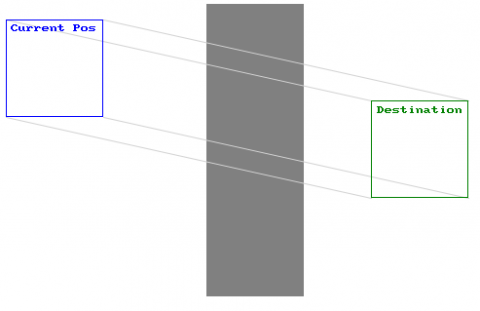 When doing a swept test, the area traveled is also considered for the collision test, not just the final position/destination for the object in that frame.

Essentially it's about (for the AABB case at least) extending the corners of the AABB in the direction of travel by the velocity, and calculating if and when the intersection with the obstacle occurs. The article linked covers this in detail for AABBs along a linear path, the solution for more complex shapes with non-linear movement is a bit trickier.

Not the answer you're looking for? Browse other questions tagged android collision-detection touch .

6
Which Side Was Hit?

1
Collision Detection for sidescrolling Tile based Game
5
How do I resolve a collision of a rectangle with two rectangular tiles at once?
1
Make a 2D character stop moving and going back when encounter an obstacle
0
How to flick gameObject using Touch?
1
Help with Resolving Pixel Perfect Collision
1
AABB 2D Collision response teleports player when hit on wrong edge
1
How to allow to slide rectangle to not colliding with corners between two rectagles?
0
SDL Sliding Collision