I've got a character that makes use of isGrounded() to determine whether I can jump, whether my air-jump is reset, and the amount of friction to be applied. I've run into a common problem, isGrounded() is fluctuating every frame returning true and false randomly resulting in jagged movement.

The standard suggestion is to constantly apply gravity. Unfortunately, aside from any other more nuanced issues that this could result in, this only works for me if I apply so much gravity that I am no longer able to climb up slopes. I need a way to keep the character grounded without applying large amounts of gravity every frame.

A common cause of this problem is using the Physics resolver for determining if a character is grounded. The issue arises because the physics solver's whole purpose is to push your character and the ground apart (so they aren't inter-penetrating).

Tricks like increasing gravity work by attempting to force the character back into the ground each frame. This isn't very reliable, as you've mentioned, and increases the work of the physics engine and decreases physics stability.

Some physics engines can further attempt to resolve this problem using things like separation slop (which means the objects aren't completely pushed apart) or by maintaining a contact cache. Using these features to solve the gound detection problem can require some extra work, though; the results of testing for sloppy collision or querying the contact cache may require the use of different APIs or events than what you're currently using. I'm not super familiar with Unity physics so I can't provide any specific insight for your case.

Using multiple rays or multiple sensors can also help you detect some interesting scenarios that the simpler physics-collision method has trouble with. For instance, if you want to detect if a character is standing on a ledge, the use of multiple rays or sensors can indicate this clearly (e.g. the left sensor indicates there's ground but the right sensor does not, thus the character is standing on a ledge).

Using several rays or sensors of increased height can supply further information. For instance, short rays might detect if the character is very near to ground (close enough that you can consider them grounded) while some slightly longer rays can indicate that the character is near ground. This can be used to inform animation, to control game features like double jump, or to help keep characters grounded when running down ramps (if the character was grounded and the next frame - no jumping involved - the character is only very near the ground, snap the character back down to the ground).

Physics engines and platformers aren't a good fit for each other. You have to muck around behind the physics engine's back using techniques like I've described to achieve that ideal Nintendo-like feel to your characters.

I've run into similar problems and realized my character's animation was causing the fluctuation because I had both the physics engine and an animation moving my character.

My solution was to avoid collider collision detection as my means of ground detection. Instead I use ray casting. See this answer here: http://answers.unity3d.com/questions/575637/ground-detection.html 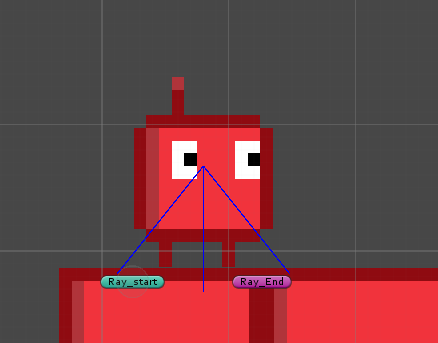 Not the answer you're looking for? Browse other questions tagged unity c# collision-detection .

1
How do I get parabolic movement in Unity using Rigidbody2d?
0
Gravity not being applied to character, using character controller
1
Character controller passes through mesh collider
1
Collision between complex polyominoes travelling at different velocities
2
Switching character and keeping animations in Unity default third person controller
1
jumping and movement with rigidbody2d.velocity, gravity problem
0
Character Controller Rotation in Unity
0
My character can jump even when its not grounded