Now I have the following single threaded architecture: when the graphics device is initialized, a dummy window and a "shared context" is created. This is the only rendering context (HGLRC in Windows terms) I'm creating. Every time a new window is created and the graphics device is asked to create a "renderable surface" into that window, the same "shared rendering context" is used. I can do this because I set the same pixel format for each window, so there is no point to make multiple rendering contexts (that would just make my life harder than it should). Here is a small image representing the current design: 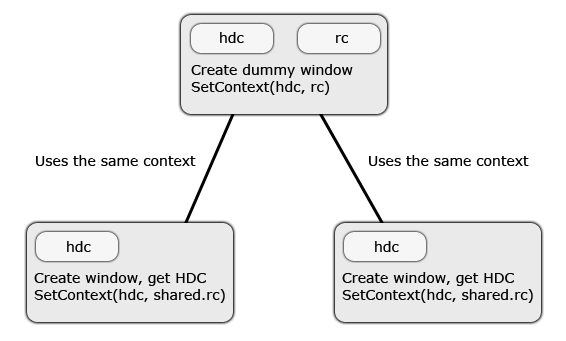 I've read some topics about this but now I'm confused since I read really different point of views, so I have some questions:

If you wish to be making OpenGL calls from two threads simultaneously (as in your example of one "loading thread" which is creating textures, VBOs, etc), and one "rendering thread", then as you say, you need to create a second context, with shared data between the two contexts.

Do note that shared contexts do not share all OpenGL data. Particularly notable exceptions are FBOs and VAOs, which will remain only in the context where they were created.

If you wish to make use of data inserted into one shared context from the other context, you'll need to put a fence in, to make certain that the data is definitely in sync between the two contexts before you try to use it. For example, if you want to draw something which has just finished loading, then you'd want the loading thread, after it has finished loading its data and pushing it into its shared context, to do something like this, before signalling the main thread that it's okay to draw the loaded data:

Instead of making OpenGL calls directly from a second thread via a shared context, the usual advice is to instead simply prepare data from that second thread, but actually perform all the OpenGL calls from the main thread. Drivers, they say, are generally much better-optimised for the single-context case, and it's worth trying to fit the way the drivers want to work, rather than do anything complicated and weird, like shared contexts.

So it's worth considering whether you really want to go down this path. It gets complicated fast, and you pay a performance penalty for every extra shared context, even when you're not actually using them.

The short answer: No!

Unluckily, OpenGL does not truly (contrary to folklore) support multithreading. No, really, it does not.

You are of course aware that a context can be (must be) active for exactly one thread using that context, and making a context current between threads effectively causes lockstep behavior and is horribly expensive.

Now, sharing two contexts (with one context each bound to one thread) sounds like it would give you just what you want. However, this is an illusion.

Sharing contexts will significantly degrade overall performance due to internal synchronization and will be slower than just doing everything in one thread.
When I tried this some years ago, sharing contexts, even if there were no changes made (so, really nothing to synchronize!) would cause an approximate 8-10% performance drop compared to using a single context and a single thread. Maybe drivers have somewhat improved since then, but I would not rely on that since sharing contexts is not a very commonly used feature, and not a top priority.

Be sure to use a technique like buffer orphaning (or use the copy write buffer) and the unsynchronized bit to avoid unnecessary stalls on modifying buffers that are still being read from and client/server syncs. Unluckily, even unsynchronized maps will have some syncs that are unavoidable.

If updates are frequent (probably not the case in your example) and persistent mappings are supported, you may want to use these, making the repeated mapping/unmapping unnecessary. Just map once and pass a pointer. Be aware that persistent mapping is slightly slower overall, so it's only advantageous if you have frequent (every frame, or nearly so) updates where the cost of mapping/unmapping is dominating.

Not the answer you're looking for? Browse other questions tagged opengl architecture multithreading .

1
WinAPI SwapBuffers and Threads
1
Setting up openGL on Linux
2
Displaying animations during loading screens
2
How can I read texel data on a separate thread in D3D11?
7
What are the implications of using multiple OpenGL Contexts on a single thread?
1
OpenGL calls from a different thread?
4
Resource streaming with job threading system
3
OpenGL contexts
3
In OpenGL, what does it mean to make a context current?