How can I create a world map like Mario 3's? 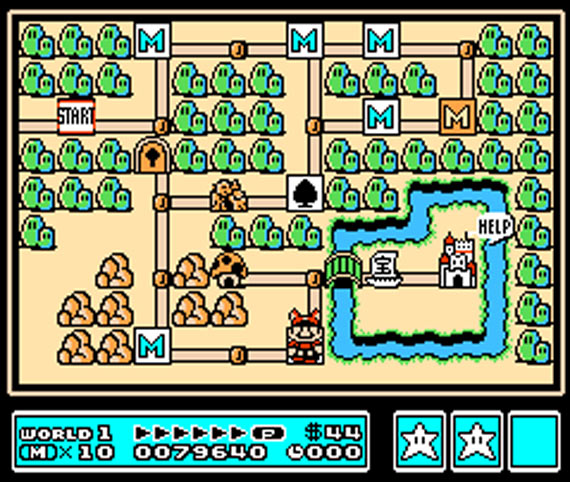 where Mario can walk between levels (nodes?) by pressing up, down, left and right on the controller, and Mario can only pass through a level when it has been cleared.

What I have so far is a list of level nodes:

The level node contains stuff like position, the type of level node (ground level, water level, castle level and so on). It also contain a neighbor node array, which in my case is 4, since I want the player to, eventually, be able to walk from a level node in all four directions. A level node might only have two ways of travel though, left and right for example.

The type variable is either a horizontal piece, a curve piece, a bridge piece and so on.

I have though about using A* and make a path finding map but it feels like it's over-complicates things.

I would like some help on how to achieve this.

I would adjust SPathPiece so that it knows about the nodes it connects.

I would then hook up the nodes that the road connects. For the pawn to walk I would put in a basic FSM

When you call WalkToNode(NodeToWalkTo) it would search the road path pieces for the road that connects both of the nodes (current node, next node) and cache it.

The state machine would then walk from the current node to the path piece start. It would then walk the path, then when it gets to the destination node it would walk to centre of the node.

Another alternative is to adjust SLevelNode so that it carries the list of road pieces it needs.

For the finding of route between nodes you could use a recursive search for the destination node. i.e.

The other thing you could do is adjust the above so it increases a reference count and return the length of path, the actual connecting nodes is then returned. That way you'd walk the quickest method rather than the first one found.

You'd also need the current node list so that if you visit the same node twice you bail out and return false because you are in a circular list.

This will go horribly wrong though if you increase the size of the map to much because it'll chew through stack.

Not the answer you're looking for? Browse other questions tagged 2d maps path .

6
2D Side Scrolling game and "walk over ground" collision detection
4
Efficient path-finding on 2D tile-based multilevel map
0
How can I store additional attributes on DCEL edges?
0
Pathfinding to find the route to nearest resource in 2D grid
3
Pathfinding to unknown destination point
2
How to iterate through members of lists of members of lists within members of previous lists?
0
Random 100x100 map using all levels from 1 to 100
0
Draw a graph as a world map in UI?