Maze or puzzle algorithm for something similar to noodles

Not sure if anyone has played Noodles at all https://itunes.apple.com/gb/app/noodles!/id967624193?mt=8 but it is a simple puzzle game, that involves rotating tiles until they link up. The tiles are either 4-sided or 6-sided and each tile can have 1 of a set number of 'pipes' including end pipes. There's only one solution which you reach by joining all the pipes together to a special 'starter' pipe which can take the form of any of the other pipes. There's also no loops.

What type of algorithm would someone use for this? I thought it could perhaps be a maze algorithm, but I'm struggling to understand how you would go about this.I think it's because in essence there aren't any walls, just different styles of connectors. But is this in essence a perfect maze? Does anyone have an idea of a starting point for an algorithm to accomplish something similar?

I'm not specifically looking for code, but a help in the right direction to identify a relevant algorithm or how someone might go about this. Though I have tagged this 'ios' as that's what I would ultimately be targetting

A standard maze-generation algorithm would work just fine in this case. There are walls. What you see are just the paths through those edges which are not walled. A wall is every edge which is not connected. I added the "invisible" walls to one of the screenshots of the example app you posted: 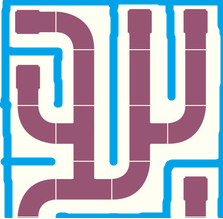 Not the answer you're looking for? Browse other questions tagged ios puzzle maze or ask your own question.