What does pressing CTRL do when editing a sprite sheet?

I have a multi-sprite sprite sheet. When I have a blue box selected, and I hold CTRL, the box turns green. I have played with it, but cannot figure out what it does. I checked the documentation, but I don't see anything about turning the boxes green.

What does holding CTRL when editing a sprite within a multi-sprite sprite sheet do?

Holding ctrl in the Sprite Editor allows you to manually move the pivot point with snapping. With ctrl pressed (orcmd on a Mac), you can snap the pivot to one of the pre-defined locations, as defined under Pivot on the control panel: Center, Top Left, Top, Top Right, Left, Right, Bottom Left, Bottom and Bottom Right.

The Unity manual does not mention this feature, though it does mention an alternate: 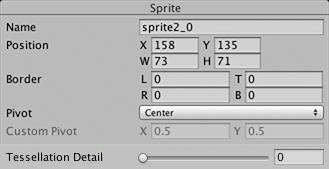 ...
There are also settings for the sprite’s pivot, which Unity uses as the coordinate origin and main “anchor point” of the graphic. You can choose from a number of default rectangle-relative positions (eg, Center, Top Right, etc) or use custom coordinates.

If I may speculate, I would say this feature has been implemented for the purpose of consistency. The manual does not deliberately mention it, but pressing ctrl to enable pivot snapping is a feature I have seen in other programs, before. While Unity officially directs you to use the control panel, the shortcut key has likely been implemented for users who are already use to holding ctrl. Such implementations are often referred to as external consistency, and helps facilitate human-computer interaction.

Not the answer you're looking for? Browse other questions tagged unity spritesheet .

2
Opengl drawing a section of a texture stretched over a quad
10
Sprite sheet textures picking up edges of adjacent texture
10
Is white the best base color to start with when planning to shade sprites within Unity?
0
2D animated sprite in 3d Game
1
How can I mass-duplicate or "paint" Unity objects?
1
Unity "static" references
1
How to find the closest point on multiple colliders within a box?
0
How do I add a "pointer" to my UI menu?
1
Unintended window opening when pressing Unity's "Submit" button
0
How do I display the next speaker image in my dialogue?