I am currently developing small 2D game in Unity, in which player is using swipe to create objects paths. I already did almost everything, but I hit a wall which i cannot pass. The thing is, that when I am using Bezier Curve I have to specify all points to have a base for my curve, but I'd like my object to move further after passing end point. Look at the image. 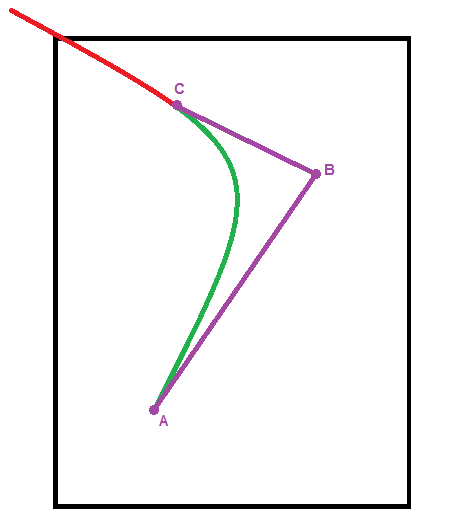 I've created a curve based on points A, B and C. The curve is green, but it doesn't reach the screen end, so I'd like to extend it with the red line. This my code to get a point on a curve.

I heard that passing parameter T greater than 1 should acutally do the thing, but it does not always work with my curves. Sometimes the object starts to go backwards or goes into some random direction. I would be grateful if someone could help me solve this problem. Thank you.

You could continue the Bezier curve with another cubic curve to accomplish what you want. Basically add a new curve that starts at C and ends where the line crossing points C & B intersects the screen border. To ensure that this extended curve is C2 continuous with the original Bezier curve (i.e. is smooth in both direction and velocity), you should have the same tangent (both length & direction) at C for both curves. For the end point tangent you could use direction of C & B line and length of the start tangent.

This would be easiest to accomplish using cubic Hermite curves instead, which are controlled with end point positions and tangents. If you want to keep your original Bezier curve evaluation though, you could evaluate what the tangent for the curve at C and create Hermite curve for the extension. I think if you want to use Bezier curve also for the curve extension you could create control points at 2C-B and another at X+(B-C) where X is the intersection between the screen border and C-B line to ensure C2 continuity in addition to C and X control points.

Also another easier solution would be to simply just continue the curve to the direction of the tangent at the end of the curve until it intersects the screen border. You just need to be careful how you interpolate this line segment to ensure C2 continuity.

Not the answer you're looking for? Browse other questions tagged unity c# beziers .

2
How do you make game objects (enemies, NPCs) move in interesting, non-linear ways? (e.g. shoot 'em up enemies)
4
What is the simplest way to export a bezier curve created in Blender to a text file?
4
Controlling roll rotation when travelling along bezier curves
3
Create a continuous flight path on a Bezier Curve in Unity3d
0
How to tween to move an object in arc?
1
Consistent normals at any angle in bezier curve
7
How to create an illustrator/photoshop-like pentool for creating bezier curves in Unity