I am completely new in game developing and even more new in the use of Libgdx. So far I have successfully done great thing on my game project thanks to all the advices I could have gathered on this forum. I would need your brilliant help once again.

I have several TiledMaps and on each one of them, there is an object layer named “trigger”. This layer contains objects with name corresponding to an animation in my code. All the animations of this layer are loaded thanks to TextureRegion.split.

Here is the logic of my gamescreen class: 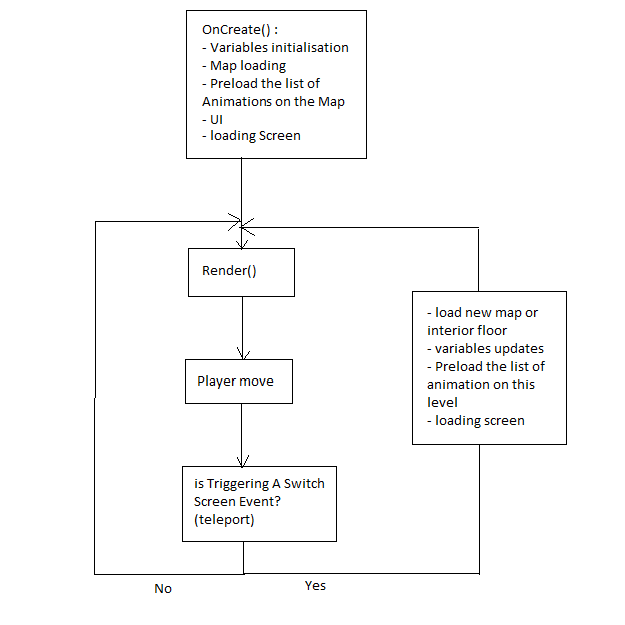 1) Preload all the animations of the game in the OnCreate and loading screen:

Far from being a good idea with my current game architecture. I expect having 300+ animations (with the fighting ones, cutscenes…). With above tests, it would take 3+ minutes on a powerful device as the Samsung Galaxy S6 for instance.

2) Preload new map animations in another Thread when the user is approaching a teleport trigger:

3) Label a group of animations with a level-flag and preload them only if level flag changes:

For instance: Level1 flag for 2 exteriors which contains 10 interiors (houses for example)

Level2 flag for 1 exterior and 6 interiors.

On that example, it will just require to preload and having a loading screen when we change of level but with the current architecture of my game code, it will still be a lot of time consuming.

4) Refactor all my code and include logic I was not aware of.

I think it is the best option here. I heard of AsseManager for instance but I have no idea how it is working with Animation object.

Thank you all for your help in advance!

Thanks to Philipp's advice, the profiler made me found that I was calling tmx.loader in a forgotten loop somewhere (I was so stupid back then).

Not the answer you're looking for? Browse other questions tagged android libgdx optimization .

12
Poor performance in android when running APK, runs fine in browser
0
Speed up loading of png files (used for textures) in Android OpenGL Game
0
Optimizing Draw calls in MonoGame Android platformer
2
Rendering sprites on a Mali-400 MP device
3
Libgdx game crashes on some devices without any Errors / Logs
1
Why does my Unity/Android game get a small amount of lag when not being touched for some time?
0
Graphic render speed in libgdx using many sprite sheets