Difficulty with linked lists in drawing

I've recently started game development in C++ and decided to make an ASCII based snake game. To hold the values of the snake tail I decided to use a linked list due to its flexibility when it comes to manipulating it.

Each node holds the x and y coordinates of a segment of the snake's tail.

The linked list is successful in holding data, creating a new node whenever the snake eats the fruit, but I do not know how to implement this data into my draw function.

I am aware of the issue being caused by a logical error in my program due to the while loop breaking my if else sequence. I just don't know how to fix it.

Here is my current draw function:

As you can see I've tried to retrieve the values from the nodes via a while loop. Unfortunately by doing so extra spaces are added and the frames are extremely glitchy. I've been racking my brain over this issue for ages. Any suggestions would be appreciated, thanks. 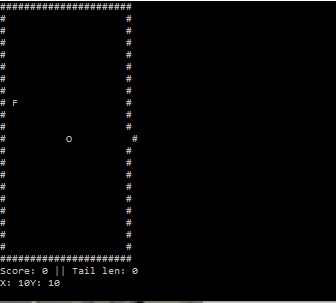 There are couple of logical errors here. Let's take a scenario, where you need to draw a snake tile:

You go trough each nodes of the snake, and you find one at the current position, so you draw an o. Next you check if there's a fruit at that position. If yes, then it'll draw an F there, if not, then a space. See, no matter what, you'll always draw at least 2 characters where a snake is, an o and a space or an o and an F.

The same happens if you're at the edge of the map. You draw a space for an empty tile and a hashtag.

To fix this issue, create a boolean flag wich marks if you found a snake at that tile and only draws a space if you didn't:

Your syntax is getting muddled because you're doing too many things at once: traversing the game space, traversing your snake (and fruits, walls, etc), and outputting. As you have seen, you don't have enough information at the innermost level to decide whether you should output one more character or not.

That can be solved by adding more logic as Bàlint's answer did, but it can also be done by splitting your code into more contained consituents. In your case, you must at one point decide on a single character to output in the current tile. That's a prefect use case for a lambda!

Note: the code is untested

I have replaced the std::endl calls with '\n': std::endl forces a flush, which probably explain a good part of your frame gliching issues. You should use std::endl or std::flush only when you really want to halt the program, flush everything to the console, and then move on.

It looks like you're using using namespace std; at global scope as well. If so, you should stop doing it: it breaks the purpose of the std namespace completely. If you wish to omit std:: for a portion of code, put the using namespace directive in the tightest scope possible, or better yet replace it with precise using-declarations.

There's still things that can be improved in this code:

Not the answer you're looking for? Browse other questions tagged c++ data-structure .