In my game I want skeletons to occasionally lob bones at the player. The player can be anywhere in relation to the skeleton (above or below, to the left or right), and I want the skeletons to throw a bone such that it lands on the player (or its parabolic arc intercepts them while rising, if the player is above the skeleton).

Given an arbitrary starting position, an arbitrary target point, and an arbitrary launch angle, how can I calculate the initial velocity of a ballistic projectile (assuming no air resistance) such that its parabolic trajectory intercepts the target point?

I know there are a number of similar questions on this site, but none of them appear to have this particular set of requirements:

The Wikipedia article Trajectory of a projectile comes close, but I have no idea how to solve that for velocity. 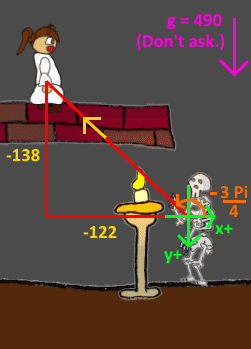 In computer coordinates, the Y axis is inverted from Cartesian coordinates. The accepted formula operates independently of this, but it's unintuitive to deal with. This means that gravity will be a positive number, while being above the projectile will result in a negative displacement.

This also means that the fixed angle you choose will be the negative of what the habitual version would suggest.

As a final note, I adjusted for the absolute value of Vx by performing this manipulation before calculating Vy:

First note that the initial velocity V at angle theta (from the horizontal, without loss of generality) has X and Y components Vx and Vy given by:

Then by referencing the equations in my answer here, one readily obtains that at the time t of intersection:

where Dx and Dy are the relative displacement of the target from the thrower.

Eliminating t in the first by substitution of the second gives

and then by rearranging

But Vy == Vx tan(theta) from the problem statement, so

21
Calculating minimum velocity of the projectile needed to hit target in parabolic arc
4
How to implement deceleration and stopping over a certain distance
2
Calculating initial velocities given trajectory parabola
1
Throw object towards predefined place?

14
How to calculate turn heading to a missile?
3
How to implement throw curve with virtual height in a 2D side-view game
6
How do I determine a good path for 2D artillery projectiles?
3
Throwing a ball and estimating its path using a Physics engine
4
How to rotate an object along its trajectory path?
2
Calculating initial velocities given trajectory parabola
2
finding the angle to launch a projectile at a 3d coordinates
0
Required initial velocity (fixed launch angle) for projectile to hit a target
1
How do I launch a ballistic projectile to hit a moving target, given: launch position & angle, target position & velocity?