Finding when shapes overlap and lines intersect but exclude points/edges

I've been looking for a c# algorithm to help determine if shapes and lines intersect but want to exclude boundary overlaps. Here's an example: 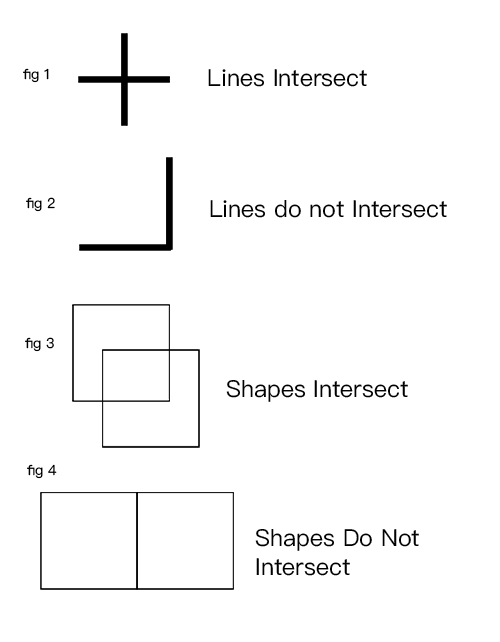 A: Is this an efficient/correct way to do the checking?

B: How do I ignore when they are on the boundary as illustrated above?

You need to change your final check to also check for equality. So change the line

Not the answer you're looking for? Browse other questions tagged unity c# mathematics geometry or ask your own question.

5
Adding tolerance to a point in polygon test
4
Create shape from points / lines in editor and mathematically calculate nearest points within shape
6
Understanding marching cubes and voxel data relationships
3
Why would a Bounding Sphere and BoundingBox not intersect (when they should)?
2
Storing visibility graph for path-finding: do redundant and non-visible pairs of points have to be saved?
1
Evenly distribution of 2 or more shapes given their x and y points inside a bounding box
0
Why when drawing a box using LineRenderer the connected points of the lines is not complete?
0
Event when nodes overlap, but not collide
3
How to completely stop the camera from clipping into the ground