Why is the bullet not created realitive to the player?

I'm using GameMaker to make my game and I'm trying to get the player bullet to fire out of the players gun but for some reason even though I checked 'relative', the bullet is still being created at the top of the room.

Why? How could I have the bullet created relative to the player?

The relative label can give different results, depending on where used. When an object is created relatively to another object, it means the x and y coordinates you are giving as parameters will be summed to the object calling the Create Instance function. You can achieve this in different ways.

Since you want the bullet being created at player's position, you should call the Create Instance from within the player object. If you are calling the function from another object, you will get wrong results.

You can also put the Create Instance function anywhere you want, as long as the Applies to field is referring the player object: 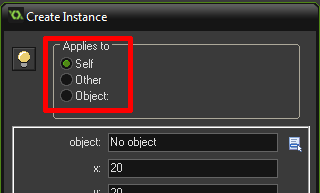 To do so, from the Applies to field select "Object", then choose your player object from the list, and you're done.

Maybe not the best solution, but it will work as well. Instead of creating the bullet relatively, create it at an absolute position (uncheck the relative field) and set such position as the player's: use oPlayer.x and oPlayer.y as x and y coordinates (change the oPlayer object name according to your project).

That's it. Let me know if something isn't working, I'll try to help you. Also, if you could provide some info such as a screenshot of the functions inside your object, we may take a deeper look to solve your issue.

2
Collision detection, stop gravity
1
How would I make a bullet shoot from my player to my mouse.
4
What's the difference between variables defined with and without the 'var' keyword?
1
Why is the code in this if statement being run when the condition for it is not met?
0
How to bypass build-in variables?
1
Gamemaker Multiplayer Game
1
Game running with fewer steps than desired (game created in GameMaker)