How do I get a Light's Range value in Shader?

I'm trying to write a simple frag/vert shader that, depending on whether it is in the range of a light, will paint the appropriate colour from either the 'lit' texture or from the 'unlit' texture.

Therefore, I need to compare the distance between the light to the range of the light. I've been googling all kinds of things, but I can't seem to find a way of accessing the range value of the light. Is there a way to do so? If not, is there some kind of derived data I could use as an alternative?

I was able to find this method here, which seems to be the most promising so far, however after playing around for a bit, I still can't seem to get what I need. There's some talk about _LightMatrix0 not being populated. Can anyone confirm?

I've also had it suggested to use SetFloat() and pass in the range like that...however, that provides no easy way of telling one light apart from another short of using the light's position as a key. As several key lights in the game will be moving this is just ugly and inefficient.

I found the variable unity_LightAtten in the Unity Shader Variables documentation. However, this is only used for Vertex Lit shading, which isn't exactly ideal, especially considering the lack of console support. Could there be a way to pipe this variable to Forward Rendering?

Update 2 For clarification, shading should otherwise be 'flat' (ie no need for diffuse etc): 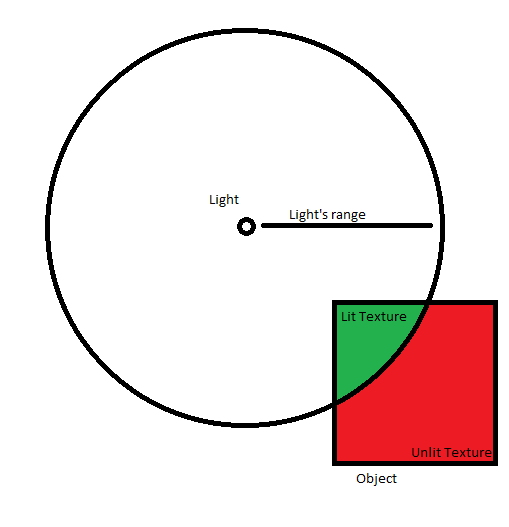 Also, what I've currently got (albeit, not currently working as desired and currently using a workaround):

Have opted to use my 'workaround' shader as posted in the question. _Pullup can be tuned appropriately in the material to match the range of the light as closely as possible when working by eye.

I believe you can use: _WorldSpaceLightPos0.xyz

Not the answer you're looking for? Browse other questions tagged unity fragment-shader cg shaderlab .

2
How can I support many point light sources in a dynamically-generated level in Unity?
3
How to prevent intepolated texture in fragment shader (Unity CG)
6
Why can't I sample a texture in a vertex shader?
0
how can I make delay in shader?
1
Low fps on Arm Mali GPU
0
Generated Mesh Does Not Have Shadows/Shading