Computing chance of winning when dealing with fuzzy numbers

Computing chance of winning in a one player and one enemy battle when using fixed numbers is quite easy; for example if we have these numbers:

Now considering using not fixed numbers (Attack and Attack Interval are fuzzy), for example for these numbers:

Now this changes choosing the winner for some numbers; either the player or the enemy can win the battle. How can we compute the chance of winning? For example, concluding that the player has 34% of winning in this battle, etc.

UPDATE : I'm creating probability tree for player and enemy for my example with a little change in numbers to get rounded numbers. example is this : 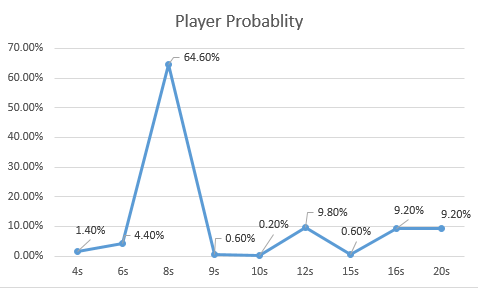 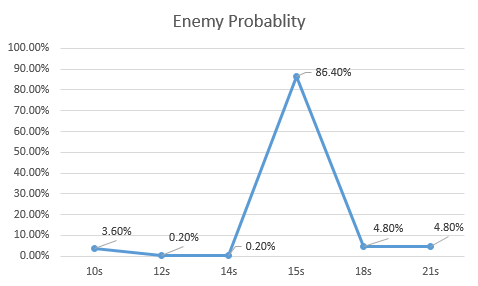 Now how can i get player overall win probability with these chart and numbers?

Update : with @realUser404 solution i can say player have exactly 82.0028% of winning in this example (if player and enemy have exactly the same time we consider this a lost.)
still if some one have better solution I'll be happy hear about it I'll wait til the end of bounty.

If you do not wish to compute all the solutions, maybe the following can get you a good approximation :

Choose fixed stats for the Enemy : Enemy : Attack : 10 - Health : 20 - Attack Interval : 5s for example. This gives you the time the enemy needs to kill you.

With that information, it is pretty easy to get the probability that you kill him first, with your fuzzy stats.

You can then calculate the same for different values of the enemy's stats, and then ponderate according to the probabilities you defined for your enemy --> This will give you your final probability of winning.

It is only an approximation, but it can be a pretty good one depending on how you do the settings, and can improve the performances by a lot.

Do This for all the times, add everything, and you should get something around 85% in your example.

Run a batch of randomized simulations (aka Monte Carlo experiments) & collect the desired statistics. This technique is especially useful if you have hard to quantize combat factors, such as freeze effects, to randomized hit modifiers, variable chance to crit, etc. It's also a nice way to capture other info like the quickest victory, least damaging, most damaging, etc. I've seen this approach used in Brogue for instance.

In terms of draw backs, this technique general requires loosely coupled game logic &/or games with easily restored logical state. It is not good for situations where your combat is tightly coupled to your graphics / animations.

I usually automate the process of finding a good # of trials for this sort of thing. This let's me experiment with a potentially wide variety of different combat mechanics & I can easily adjust my estimate finder without doing a bunch of testing by hand.

This is written in python 2.7.11 if you want to test it out for yourself before you start working it out in the language you're using if you decide to use it. There are no special requirements, just make sure to use python 2.7 and remember to import math.

This range is important because we want to figure out how long one person has until the other has a chance of defeating them. We then calculate the odds of that person defeating the other during this time. For the remainder of this post, I will refer this person (the person who has the opportunity to defeat the other first) as Sub_A and the other Sub_B. Just so I don't have to describe it every time :)

example: there is a 40% chance that the player(Sub_A) will defeat the enemy(Sub_B) before the enemy has a chance of defeating the player. That leaves a 60% chance of both users having an opportunity to defeat one another afterward.

Hopefully this does the job! I tried to put in some helpful comments, but ultimately it just takes a some figuring out. Please let me know if I made any mistakes or if anyone has any improvements/changes. I would love to know!

Since there could be many attacks before the first player/enemy dies, this tree could have many levels of branches, so you may need to write a short program to perform the calculation.

This problem looks small enough that you could just do a brute force exhaustion over all possible random choices, as described in this answer.

Then using those tables, you can then compute the probabilities of the player doing 30 damage before, at the same time as, or after the enemy.

You can even do that last calculation in time linear in the table size with the right algorithm.

You can also optimize the exhaustion over all random choices.

Rather than iterate through the possible states — e.g. pairs consisting of "the time the actor can attack next" and "damage previously done done" — you can iterate through them in a topological ordering (e.g. increasing time). Using a hash table, you can detect when a game state is duplicated, and merge the probabilities of arriving at that state, so as to avoid duplicating work.

Also, claim that analyzing the two actors separately is actually an optimization an educated guess — depending on the sorts of actual problems you have, it may actually be better to do the exhaust over all of the possible states of actual combat.

Intro
I'm going to specifically answer how to use the probability tree to get win/loss ratios.

For starters, your math becomes very ridiculous to hand-design a flowchart. I didn't even finish the first player attack and got this: 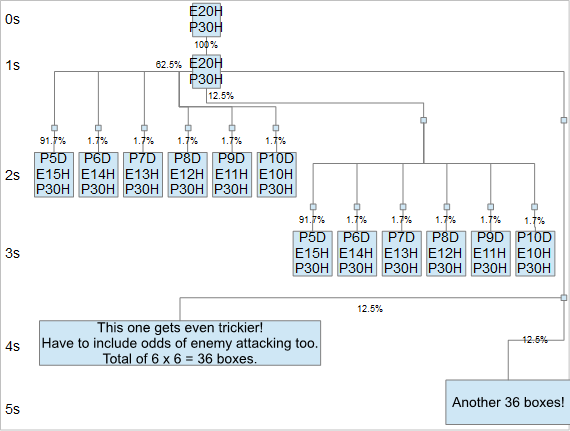 Now we get this: 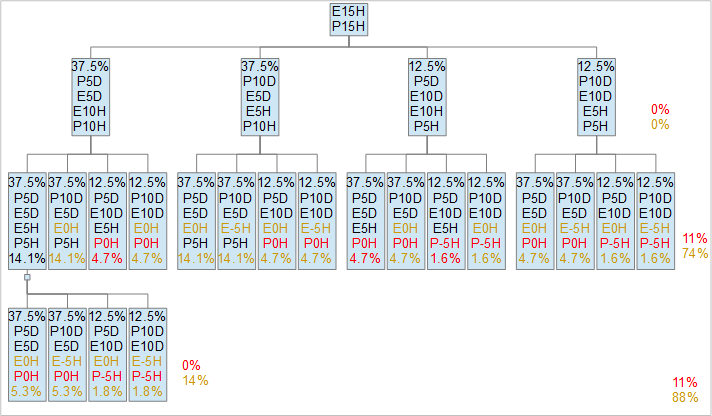 In each box, the first number represents the probability of that box occurring if the preceding box happened. Then PxD gives the player's damage, ExD is the enemy's damage, PxH is the player's remaining health, and ExH is the enemy's remaining health. The final percentage is the cumulative chance of getting to that box, calculated by multiplying each conditional chance in the chain (and rounded a bit, so the final totals won't be exactly 100%). Orange text means the player killed the enemy, red text means the enemy killed the player.

Specific Numbers
For a specific example, let's take the left-most branch each turn. 37.5% of the time, both player and npc roll normal hits, doing 5 damage each, leaving them at 10 health. After that happens, there's a 37.5% chance they each roll normal hits again, doing another 5 damage each, leaving them at 5 health. Finally, there's another 37.5% chance they each roll normal hits a third time, doing a final 5 damage and killing each other. Since we said the player wins a tie, this counts as a win for the player. The total probability of the fight ending this specific way is 37.5% x 37.5% x 37.5% = 5.2734375% ≈ 5.3%.

Applying to your Numbers
Using your example numbers, you'd need to have a lot more branches, including the fact that many branches include no damage when no attack occurs on that particular round. Which means you'd likely want to automate the process instead of doing it by hand.

I'm not exactly sure how you got your charts, but I think you can convert it to similar numbers by multiplying each of the player percentages by the percentage of player wins, then the same for the enemy chart. So, for example, if the player wins 80% of the time, the first number on the chart becomes 80% x 1.4% = 1.12%. Then the first number on the enemy chart becomes 20% x 3.6% = 0.72%. Etc. 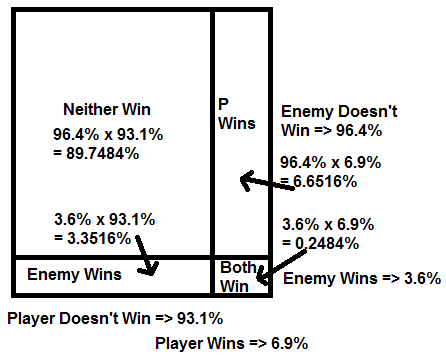 Not the answer you're looking for? Browse other questions tagged mathematics algorithm fuzzy-logic or ask your own question.

6
Determining the probability of a successful attack based on the equipped weapon?
2
Mafia kill algorithm
8
Ideas for attack damage algorithm (language irrelevant)
0
To-hit formula for turn based isometric battle RPG
2
Increasing chance of good loot after multiple tries
3
How do I balance these numbers in a rock-paper-scissors attack system?
1
In track and field dash, determine starting speed from a final time with acceleration
0
EnemyAI rotating on Y-axis in opposite direction
0
Algorithm to solve a battle in a card game