How can I optimise a Minecraft-esque voxel world?

I found Minecraft's marvelous large worlds extremely slow to navigate, even with a quad core and meaty graphics card.

I assume Minecraft's slowness comes from:

I could be wrong on both assumptions. However, this got me thinking about the best way to manage large voxel worlds. As it is a true 3D world, where a block can exist in any part of the world, it is basically a big 3D array [x][y][z], where each block in the world has a type (i.e BlockType.Empty = 0, BlockType.Dirt = 1, etc.)

I assume that to make this sort of world perform well, you would need to:

I guess there is no right answer to this, but I would be interested to see peoples' opinions on the subject. How would you improve performance in a large voxel-based world? 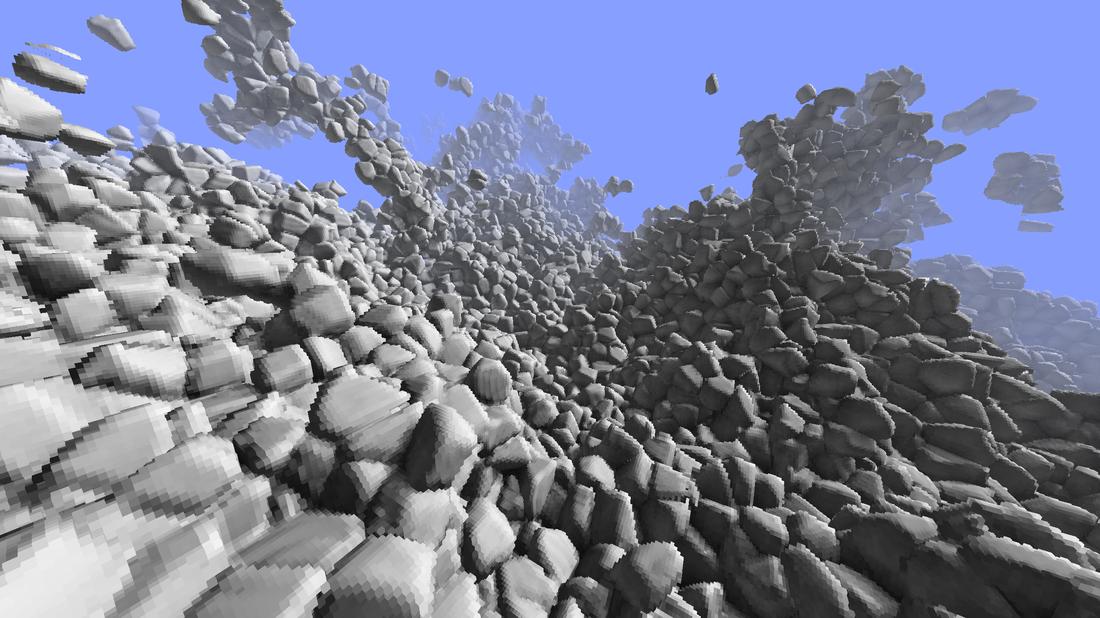 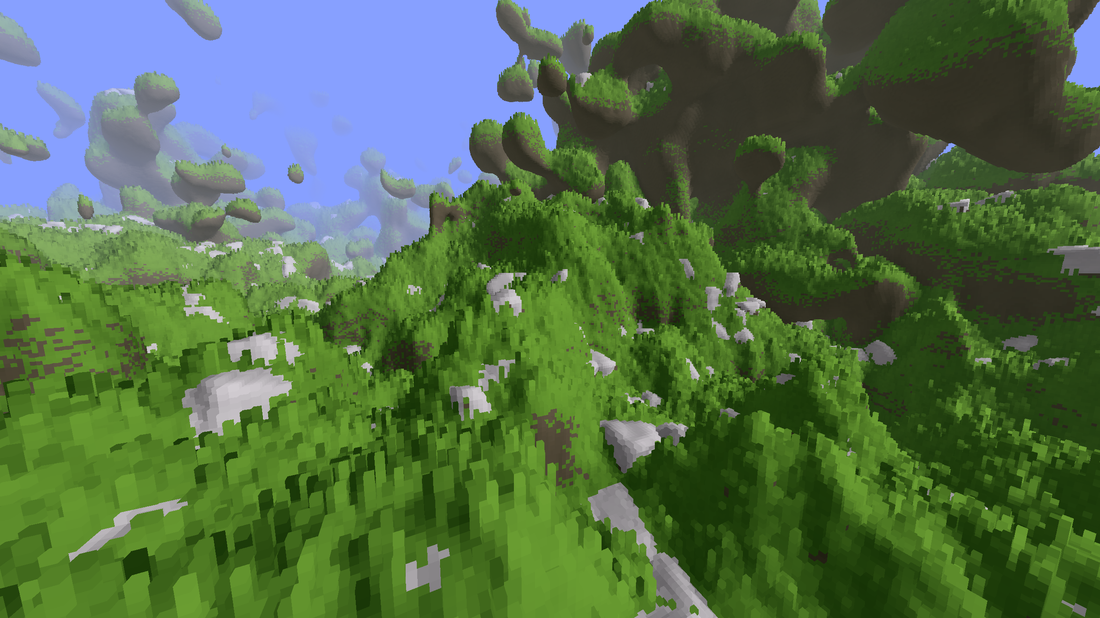 With regards to Java vs C++, I've written a voxel engine in both (C++ version shown above). I've also been writing voxel engines since 2004 (when they were not vogue). :) I can say with little hesitation that C++ performance is far superior (but it is also more difficult to code). Its less about the computational speed, and more about memory management. Hands down, when you are allocating/deallocating as much data as whats in a voxel world, C(++) is the language to beat. However, you should think about your goal. If performance is your highest priority, go with C++. If you just want to write a game without bleeding-edge performance, Java is definitely acceptable (as evidenced by Minecraft). There are many trivial/edge cases, but in general you can expect Java to run about 1.75-2.0 times slower than (well written) C++. You can see a poorly optimized, older version of my engine in action here (EDIT: newer version here). While chunk generation might seem slow, keep in mind it is generating 3D voronoi diagrams volumetrically, calculating surface normals, lighting, AO, and shadows on the CPU with brute-force methods. I have tried out various techniques and I can get about 100x faster chunk generation using various caching and instancing techniques.

To answer the rest of your question, there are many things you can do to improve performance.

EDIT 2: when using multi-index loops, best to loop int the z, y, x order rather than the other way around. Your compiler might optimize this, but I would be surprised if it did. This maximizes efficiency in memory access and locality.

You can read more about my implementations at my site

There are a lot of things that Minecraft could be doing more efficiently. For example, Minecraft loads entire vertical pillars of about 16x16 tiles and renders them. I feel that it is very inefficient to send and render that many tiles needlessly. But I don't feel like choice of language is an important one.

Java can be quite fast but for something this data-oriented, C++ does have a large advantage with significantly less overhead for accessing arrays and working within bytes. On the flip side, it is much easier to perform threading across all platforms in Java. Unless you plan to utilize OpenMP or OpenCL, you won't find that convenience in C++.

My ideal system would be a slightly more complex hierarchy.

Tile is a single unit, likely around 4 bytes to keep information such as material type and lighting.

Sectors would be a 16x16x8 block of segments.

World would be an infinite map of sectors.

Minecraft is pretty quick, even on my 2-core. Java does not seem to be a limiting factor, here, although there is a bit of server lag. Local games seem to do better, so I'm going to assume some inefficiencies, there.

As to your question, Notch (Minecraft author) has blogged at some length about the technology. In particular, the world is stored in "chunks" (you sometimes see these, especially when one is missing as the world hasn't filled in, yet.), so the first optimization is to decide if a chunk can be seen or not.

Within a chunk, as you have guessed, the app has to decide if a block can be seen or not, based on whether or not is is obscured by other blocks.

Note, too, that there are block FACES, which can be assumed not-seen, by virtue of either being obscured (i.e., another block covers the face) or by which direction the camera is pointing (if the camera faces North, you can't see the North face of ANY blocks!)

Common techniques would also include not keeping separate block objects but, rather, a "chunk" of block types, with a single prototype block for each one, along with some minimal set of data to describe how this block may be custom. For example, there aren't any custom granite blocks (that I know), but water has data to tell how deep it is along each side-face, from which one can calculate its direction of flow.

Your question isn't clear if you're looking to optimize render speed, data size or what. Clarification there would be helpful.

Here's just a few words of general info and advice, which I can give as an, um, overly experienced Minecraft modder (which may at least partly give you some guidance.)

The reason Minecraft is slow has a LOT to do with some questionable, low-level design decisions-- for example, every time a block is referenced by positioning, the game validates the coordinates with about 7 if statements to ensure it's not out of bounds. Furthermore, there's no way to grab a 'chunk' (a 16x16x256 unit of blocks the game works with) then reference blocks in it directly, in order to bypass cache lookups and, erm, silly validation issues (iow, each block reference also involves a chunk lookup, among other things.) In my mod, I created a way to grab and change the array of blocks directly, which boosted massive dungeon generation from unplayably laggy to unnoticeably fast.

EDIT: Removed claim that declaring variables at a different scope resulted in performance gains, this doesn't actually appear to be the case. I believe at the time that I conflated this result with something else I was experimenting with (specifically, removing casts between doubles and floats in explosion related code by consolidating to doubles... understandably, this had a huge impact!)

Also, though it's not the area I spend a lot of time in, most of the performance choke in Minecraft is an issue with the rendering (about 75% of game time is dedicated to it on my system). Obviously you don't care so much if the concern is supporting more players in multiplayer (server doesn't render anything), but it matters to the extent of everyone's machines being able to even play.

So whatever language you choose, try to get very intimate with the implementation/low level details, because even one little detail in a project such as this could make all the difference (one example for me in C++ was "Can the compiler statically inline function pointers?" Yes it can! Made an incredible difference in one of the projects I was working on, since I had less code and the advantage of inlining.)

I really dislike that answer because it makes high-level design difficult, but it's the painful truth if performance is a concern. Hope you found this helpful!

Also, Gavin's answer covers some details I didn't want to reiterate (and much more! He's clearly more knowledgeable on the subject than I am), and I agree with him for the most part. I'll have to experiment with his comment regarding processors and shorter variable sizes, I've never heard of that-- I'd like to prove to myself that it's true!

The thing is to think about how you would first of all load the data. If you stream your map data into memory when needed, there is abivously a natural limit to what you can render, this is already a rendering performance upgrade.

What you do with this data is then up to you. For GFX performance, you can then use Clipping to clip hidden objects, objects that are too small to be visible, etc.

If you are then just looking for Graphics Performance techniques I'm sure you can find mountains of stuff on the net.

Something to look at is the Flyweight design pattern. I believe most of the answers here reference this design pattern in one way or another.

While I don't know the exact method Minecraft is using to minimize memory for each block type, this is a possible avenue to use in your game. The idea is to have only one object, like a prototype object, that holds information about all the blocks. The only difference would be the location of each block.

But even location can be minimized: if you know a block of land is of one type, why not store the dimensions of that land as one giant block, with one set of location data?

Obviously the only way to know is to start implementing your own, and do some memory tests for performance. Let us know how it goes!

Not the answer you're looking for? Browse other questions tagged procedural-generation optimization terrain voxels space-partitioning .

2
How does Minecraft render chunks?
1
How can I efficiently form terrain from a large number of cubes in XNA?
12
Working with lots of cubes. Improving performance?
15
How to get the blocks seen by the player?
27
Is a voxel engine appropriate for a Minecraft-like game?
0
Draw cube in glsl shader