How to calculate area to fill in this Snake/Qix game variant?

I have a game which is a Snake/Qix variant.

The player controls a line which is moving on an island. Player has possibility to leave the island in order to connect that island to itself. Once the connection is made, the new area formed by the connection becomes part of the island (see picture: red line is the path the snake has made while outside the island, dark red pixels are the area/island). 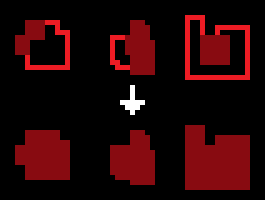 I am trying to find a algorithm (even bruteforce) how to fill the new area (in other words how to do transition between first and second line on the picture).

What I have in mind is to run a path finding algorithm between the enter/exit points. If there is a path, it means the snake connect the island to itself. The path (in green) and red line together forms a closed polygon which can then be filled (how ?)

One way you could do this, is by performing multiple flood fills in a defined area. You could keep track of your Path's Max and Min X and Y positions, so that you can have a defined area to check. This would look something like this:

Then, process the black tiles inside of this area with a flood fill. If the floodfill at any point hits that Yellow border, then you know it is not going to be inside of your path. You can discard these tiles, and move on to the next Black tile.

If the flood fill never reaches that yellow border, than you know you are inside of the path, and you can fill it all in.

I think you should flood from the outside, start with the bounding box of your snake path and the island and then use the unmarked edge pixels as a seed to flood your "true" outside. Then you can mark the inverse as your island.

The issue with flooding from the inside, is that you will have to keep track of which flooded pixel belong to which seed, since you have to be able to remove them when you hit the boundary.

Not the answer you're looking for? Browse other questions tagged algorithm path-finding pixel or ask your own question.

9
PyGame QIX clone, filling areas
11
Algorithm to see if two voxels are interconnected
1
Algorithm for staying "alive" forever
1
How can I remove unnecessary nodes from my path?
8
How to find a safe path for an AI snake?
2
Best way to get the maximum moveable Area
5
How can I fill the interior of a closed loop on a tile map?
1
Correct way of combining A* and funnel
0
Isometric tilemap circle around object