Why does this transparent shader cause objects' z-sorting to be backwards?

I am making a Klondike Solitaire game, with the intent of later expanding it to encompass other solitaire games and allow deck customization. As part of this, the playing card meshes I am creating programatically are mostly opaque, but require non-alphatest transparency in order to draw the pips (rank/suit icons) correctly.

The problem is this: 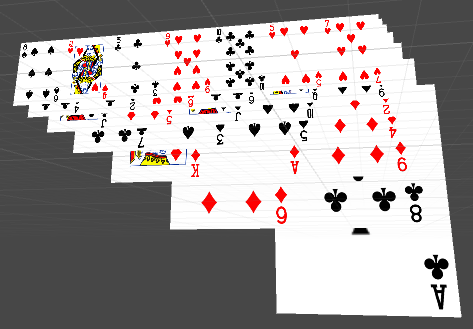 The z-sorting of the cards is the exact opposite of what it's supposed to be. I know that transparency is the problem because the z-sorting works properly when it's disabled (the #pragma alpha:fade in the shader is removed): 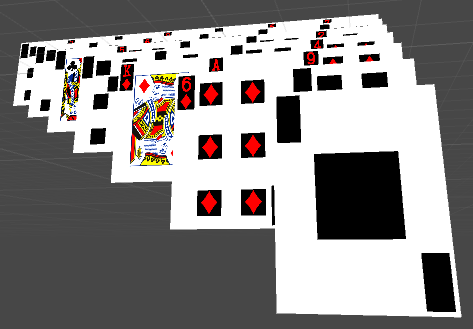 ...which obviously breaks how the cards' material is being rendered.

This is the shader I have:

Things I have tried:

From #3, I'm guessing that if I can somehow force ZWrite On despite the alpha:fade, it should work as expected. But chances are there's something else I'm missing that could work.

After doing some tests, it looks like this may be a bug in a recent version of Unity.

When you create a new material, under the hood its Custom Render Queue property defaults to -1, meaning "use whatever queue is specified in the shader file," as we would expect.

But as soon as we change the material's shader to use a custom one (I've now tried this with newly-created Surface and Unlit shaders), Unity sets the Custom Render Queue to 2000, meaning "ignore what the shader says and always render this in the opaque geometry queue"

That seems blatantly wrong, so I expect they'll fix that. In the meantime, as Toomai discovered in the comments above, we can fix this by...

Your shader's queue settings should now be respected again.

Not the answer you're looking for? Browse other questions tagged unity shaders .

1
Why does my disable z-depth test shader do not work?
1
Particles not rendering over projectors

6
Does Unity's "Transparent Bumped Specular" translate to "semi-shiny must be semi-transparent"?
0
Why does my blur shader implementation produce this strange result?
1
Why does Resources.Load cause a CastException in this case?
6
In a shader, why does substituting a variable with the expression producing it cause different behaviour?
0
Why is my custom shader rendering completely transparent?
2
Why are faces being drawn like this with my custom shader?
0
What does this shader error in Löve2D mean?
9
Why does duplicating my object cause its vertex animation shader to distort it?
0
Why does this floor() call appear to have no effect?
0
Why do I get an unexpexted token error while compiling this shader?