I have made a Fire Emblem/Advance Wars like game, and I was wondering if there are any particular techniques in the AI's in those games.

I was wondering how to let the AI make the best decisions. I have the tiles a unit can move to, I have the enemy unit positions and I have formulas to calculate battle outcomes, now I want to add those together so that, for example, the AI attacks the weakest unit, blocks a chokepoint or just moves closer to the enemy if nobody is in range.

What is the best approach to this?

Here's the easy approach, which is typically the one used for board games:

Write a heuristic which is able to determine how good a position one side is in. Think of it as estimating "from this position, how likely am I to win?" Factors to consider are relative force strength, how well your units are supporting each other, how large an area you threaten, vs. how many of your units are threatened, and the inverse of all these factors for the enemy faction. Figure out a whole bunch of factors like these, weight them according to their importance, and turn them into a 0% -> 100% estimate for how likely you think it is that you'll win.

If you want to be clever, you can "look ahead" more moves; assume that the opponent will be doing things similar to you, and so for each move, also take the best move from the opponent's point of view, and find the best heuristic for your side, after the opponent's best move. And take that move; that would be 2-ply thinking. You can keep flipping back and forth, taking best moves, and thinking deeper and deeper about the future state of the game board, as long as you have processor time to think about it.

Games like Fire Emblem and Advance Wars use finite state machines on the individual unit level. That is, all of the units act independently without any concern for achieving the armies overall condition for victory (this is most easily seen when the AI messes up by having one unit do a bad move which prevents another unit from doing a better move). The units that have different behaviors (go towards enemy, hold position, etc) simply have different FSMs.

FSMs are good for game AI because they're easy to implement and give good behavior (assuming you write good FSMs). The AI doesn't need to actually be smart or think, it just needs to make good moves.

At some point more sophisticated (let's call it "real") AI will be better, but it's much more costly to implement. It's kind of like an FSM has linear growth while "real" AI has parabolic growth, in terms of cost v quality. 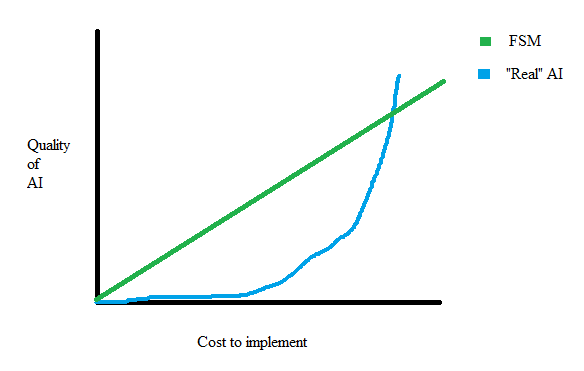 I remember an anecdote about a game AI programmer for an FPS (I forget the game) that got fed up having to update FSMs so he re-wrote the whole AI system with some "real" AI. This gave some really unexpected (but ultimately desirable) behavior where the enemies were doing cool things like breaking through windows instead of going through doors. In the sequels to this game they went back to using FSMs.

Not the answer you're looking for? Browse other questions tagged game-design ai turn-based-strategy .

126
How to develop RPG Damage Formulas?
6
techniques for an AI for a highly cramped turn-based tactics game
3
Strategy game tile and unit storage
5
How can I solve the problem of attacking being disadvantageous in TBS due to entering the range of enemy attacks?
3
Two Army Battle Simulator
1
AI - Tactics for out of range enemies