It's pretty easy to get animations rolling from a sprite sheet. Though which ways there are on combining the animations with player dynamics and motion?

I'm writing a small hack&slash&jump platform game in html5. The player should stay in place when he strikes a sword, perhaps even move a bit (one can accomplish it through a hack), but otherwise move pretty much without limits. I've got couple frames and I'd like it all to mesh together well.

I prefer to keep animation and motion separate, since it provides for more flexibility.

In my game engine I have a concept called an Action Matrix, which is basically an array of arrays of integers, which are index references into the sprite sheet. Each sub-array is a list of numbers which define the frames of an animation, and each character is assigned an action matrix.

The movement code is hard-wired to use the first four actions for the animation to be played while the character is moving, (in the four cardinal directions,) and beyond that you can create custom animations which can be invoked by playing a different action from the action matrix. These can be used with or without also moving the sprite's position, which is controlled by a separate command.

Also, by playing one of the first four actions in a loop with no movement, you can get a character who seems to be walking in place, or a flying/floating vehicle that just hovers there, or various other other versions of an "idle" animation.

I like the idea of mimicking the way it is done in 3d games; models, skeletons, and skins. I know of at least one game that made effective use of this idea.

They released a post mortem afterward and where very happy with their animation editor, Mommy's Best Object Editor. 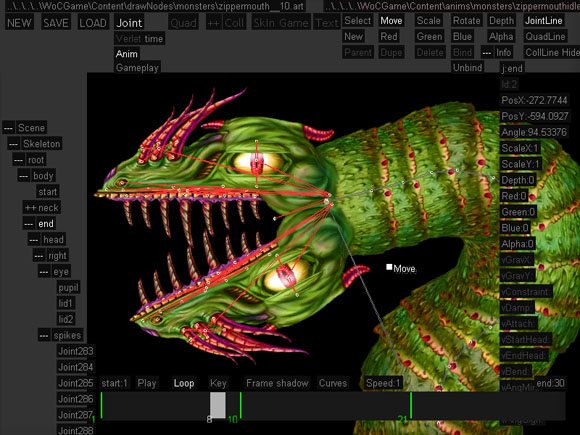 You'll have to read the one page description to get the complete understanding, but basically instead of models there are sprites. And the skeletons are only 2D, basically nodes and joints. The animation editor is used to get good looking animations, then the engine tweeks the skeletal animation for added smoothness. Like making sure a monster's feet make good contact wit the ground when it's slanted or uneven.

It's a trade-off. If you encode motion into the anim you can ensure that there's no moonwalking going on, however, by preventing moonwalking you also take away the ability to tweak speeds :o\

I'd definitely prefer having them decoupled so you can change speeds when desired. To prevent moonwalking - defer animation until your gameplay has settled down. Blocks are extremely capable of jumping, running and shooting.

Not the answer you're looking for? Browse other questions tagged architecture sprites animation .