I'm using LibGDX to implement rubber rope in which player can fly and launch. I know I could use Box2D as physics engine and I'm going to one day, but I'd like to learn it myself for now.

I've already got it working, but some unexpected movements are sometimes noticeable and I don't understand why. I feel like I haven't thought of something important. So I figured you guys might find a flaw in my implementation. 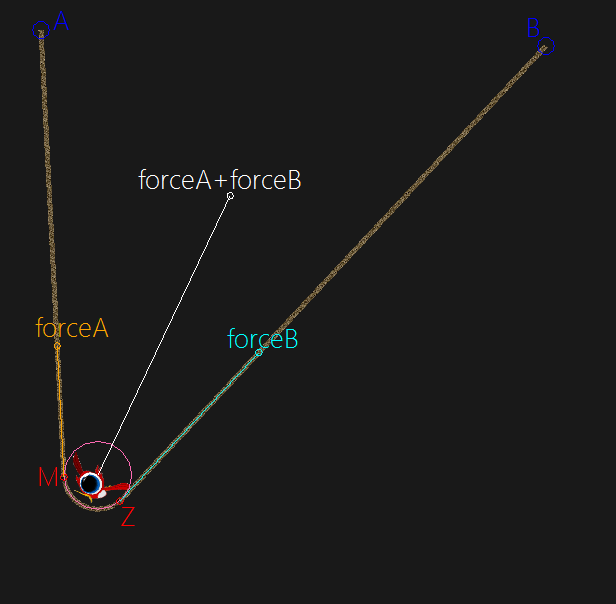 My maths is basically taken straight from the physics class. There are two forces applied to the bird, because there are two fractions of the rope. Their sum is the actual force.

Both forces are obviously laid along the corresponding rope fractions. Magnitude of the force is |F| = kx, where k is some constant and x is how much this fraction had to stretch. I cache its initial length at the beginning of collision, then measure it each frame and calculate the difference. The code:

What am I not taking into consideration?

As requested, I made a video. You can see some weird movement at the end of second swing, and the third one is completely wrong.

I also tried getting rid of Math.max() call changing line to float modifierA = A.dst(M) - mLengthA; and, suprisingly, it looks much better. Video. The question is why. Isn't it logical for the rope not to apply any force when it's not being stretched?

Browse other questions tagged java 2d libgdx or ask your own question.